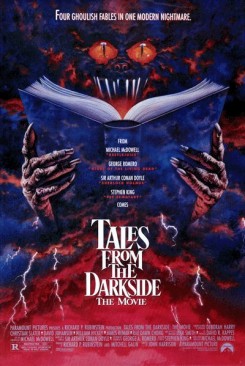 Tales From The Darkside - The Movie

"Tales" is a collection of horror stories told by a young boy who's bargaining for his life. One of his tales, "Cat From Hell", is based on a Stephen King story. Drogan, a rich old man, living alone in his mansion, hires a professional hit man to kill a cat. The cat has already killed three people in a variety of gruesome ways. Drogan owns a pharmaceutical company and owes most of his success to one drug. Five thousand cats were killed during the development of that drug (story line only) and this one cat has been sent to punish Drogan for their deaths.

In one scene, the cat attacks a woman and clings to her face, smothering her until she dies. This effect was achieved through the use of a puppet. There are several other scenes where the cat attacks. In one, the cat attacks the hit man, crawling down his throat, and into his stomach, killing him. When Drogan appears, the cat crawls out the same way he entered. Of course, a real cat did not do that, but it was accomplished through special effects, a mechanical cat, and editing with film of the real cat. The real cat had hair mousse on his fur to make him appear as if he had just crawled out of the stomach. Although many scenes will undoubtedly upset cat lovers, the real cat merely performed simple action and was trained to hiss. The balance of the action was accomplished through the use of a puppet or mechanical cat and special effects. The production company did not notify American Humane prior to filming, but it contacted a local humane society in the filming area. The humane society failed to supervise the filming. However, after extensive discussions with the production company and the trainer, as to how the questionable scenes were staged.