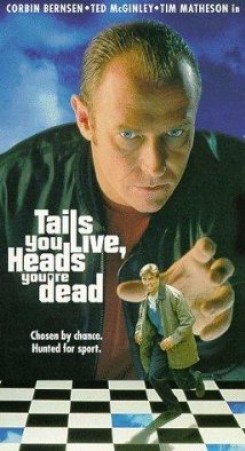 Tails You Live, Heads You're Dead

Tales You Live Heads Your Dead is a film about a man, Jeff Quinn, and Mr. Jones, a man that he meets in a bar one evening. What starts out as a friendly conversation and a game of liars dice, turns into a deadly game of kill or be killed. During their game of liars dice, Jones informs Jeff that he plans on killing him for sport. Jones travels from city to city picking his victims at random. He then informs the victim of his intentions and it becomes a game of who has the best killer instinct. Jones actually believes that a killer is lurking in all men and he thrives on seeing if his opponents will be a worthy adversary. After describing in detail a few of his other victims, Jeff realizes that the man is serious. Jeff decides to send his wife and child away for a few days after Jones gets into his house, posing as a security-systems repair man,. Later that same day, Jones gets into the house again, leaving behind two scorpions in Jeff's bedroom. When Jeff goes to bed that night he discovers the scorpions. But Jones' plan fails and he soon finds out that this time he picked a worthy opponent.

When the scorpions are in Jeff's bedroom, we first see one under the bed as Jeff talks on the phone. The scorpion is then seen crawling towards his feet. A few minutes later we see Jeff in bed and a scorpion is crawling up his chest. He opens his eyes, and seeing the deadly animal jumps out of bed. The scorpion is next seen on the floor. Jeff picks up a shoe and aims for the scorpion. We then see it lying on the floor, dead. However, the other one is still alive and nearing Jeff's feet, but it is never seen coming into contact with him. This scene was shot in cuts. A real and a fake scorpion was used for the scene. The fake scorpion was used for the shot after it is supposedly killed. A real scorpion was used for the other scenes. For the scene where the scorpion was on Jeff's chest, the trainer acted as a double for the actor. For the other scenes, the trainer merely placed the scorpion under the bed and on the floor and retrieved him after the shot was completed. In another short scene, Jones is seen standing over an aquarium with a scorpion inside. He is holding a mouse by the tail, as if he is going to fed it to the scorpion. Three mice were used for this scene. The mice were held by the tail for only a few seconds each. No mouse was used more than once. The scorpion and the mouse never made contact. Other animal action included a quick scene by the pool at Jeff's house, where a cat is seen running from A to B. Tales You Live Heads Your Dead was filmed in Toronto by a Canadian production company. American Humane was not present on the set. However, after conferring with the trainer, we are rating the film "Believed Acceptable".