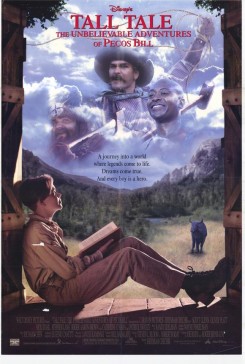 American legends were born during the early nineteenth century, when the southwest was also giving birth to the railroads and the industrial revolution. The story told in Tall Tale is about a young boy's fantasy of the future and his need to believe in the values of the past and the heroes of the legends. When Jonas Hackett refuses to sell his farm in Paradise Valley to the railroad barons for only $50 an acre, they revert to force and shoot Jonas. However, Jonas has given his deed to his son, Daniel, for safe keeping. Daniel feels he must find a way to save the farm and foil the greedy industrialists and their henchman, J.P. "Gun" Stiles. Daniel runs away and hides in a rowboat where he helplessly begins to cry. As the boat begins to drift from the dock, we realize that Daniel has drifted to sleep. Daniel had often listened to his dad telling him the legendary tales of pioneering heroes such as Pecos Bill, Paul Bunyan and John Henry. Daniel always thought these were just ridiculous tall tales. Yet, these stories made an impression on Daniel and now that he and his family are in trouble he dreams these very heroes into reality to help overcome the villains and save the farm. His boat drifts as he sleeps and finally washes ashore on a strange sandy beach where vultures perch on the bow. Daniel is awakened by two inept bandits who jostle the boat encouraging the birds to fly off. For this scene, the birds were tethered by the trainer to the bow by the use of a "jess" or leg harness. The ties around the birds' legs were made of aquarium tubing and attached to clear monofilament which was unseen by the camera and yet gentle to the birds. The line was just long enough for the birds to hop off the boat but not long enough for them to gain momentum and take flight. The bandits steal Daniel's deed and twelve cents and are about to kill him when out of the distance, a shot rings out and the guns are blasted from their hands. In a cloud of dust, Daniel sees a rider and his magnificent horse ride into view. This man turns out to be Pecos Bill and his trusty mount, Widow Maker. Pecos rescues Daniel and decides to help him get back to Pleasant Valley so they can save the farm. Pecos Bill believes that with the odds at 100 to 1 against them, they could use the help of a big man. Off they go to seek his old friend, Paul Bunyan.

On their journey, Daniel tries to pet Widow Maker's nose, but she just rears up and whinnies. Pecos explains that she is mighty particular. For this scene, a trained rearing horse was used. The trainer was on the ground out of camera range and gave the horse a cue to rear up. As Daniel wakes from a night's sleep on the trail, he sees what he thinks is a field of orange flowers. When he gets up and shakes out his blanket, the thousands of orange flowers take flight as butterflies. This scene was a computer generated image and only a few real butterflies in the foreground were used. They eventually find the logging town where they believe Paul Bunyan is working. Not realizing that Paul has left because he hates the mechanization of the logging business, Pecos and Daniel get into a brawl with the loggers. Widow Maker canters into the fracas and rears up. Pecos mounts up and Daniel jumps onto the saddle behind him as they take off to find Paul in his wooded retreat. Paul joins them, riding his big blue ox named Babe. For this effect, the ox was painted blue using non-toxic vegetable dye. The trio goes into a town where we see the railroad being built and a team of horses pulling a wagon. They arrive just as a contest is being held between man and machine. The legendary John Henry, a "steel driving man", challenges the steam driven pile driver to determine which one will pound in the railroad stake the fastest. John Henry needs someone to hold the stake for him and Widow Maker gives Daniel a nudge to volunteer. Sadly, the legend loses, but Daniel learns the lesson that if you give any challenge your best shot, you never have to be sorry. Besides, now John Henry will join them on their quest. They arrive in Liberty City and go to the saloon where they drink to the "Code of the North, South and West" which is: "Respect the land. Defend the defenseless. And don't never spit in front of women and children." Pecos also drinks to Texas, but when someone insults him, they begin to brawl. Calamity Jane enters to break it up, although the three end up in jail anyway. For this scene, atmosphere of the old west was created by using a few chickens walking about on the tables of the saloon in the background. There was also a dog who was dressed in a costume and circled on the table by standing upright on its back legs as if dancing to the music. When the fighting begins, the dog stops dancing and jumps off the table. The dog responded to the trainer's visual commands and sat up on it's hind legs and began to turn, as it was trained to do. When the dog jumps off the table it is responding to the trainers verbal command to come. The costume was tied very loosely and was not bothersome to the animal in any way. In an attempt to help his friends escape, Daniel goes to the barn and gets Big Blue Babe, the ox, to pull down the jail wall. Daniel holds her by a bit in her mouth with a rope tied to her harness and attached to the jail window bars. Hearing motorcycles, Daniel runs away and Babe stops pulling, which infuriates Pecos Bill. Once Pecos apologizes to Babe, she begins to pull again and pulls the wall down, freeing them. For this scene, the ox walked forward toward the trainer who used a second ox off screen to lead the one being filmed. The set piece that was the jail wall was pushed from behind by crew members. The animal did not strain in any way. Now free, Daniel's friends help him escape from the motorcycle gang and the four take off by raft to save the farm. Tethered to the raft are Big Blue Babe, Widow Maker and John Henry's mule. John Henry fishes off the raft with Daniel, although no fish are seen being caught. Later we see them traveling over land on horseback, on the ox and leading the mule. Daniel tells his friends about the wonders of electricity, the telephone and telegraph and the three legends just think he is telling them tall tales. As they cross the desert, we see a snake slithering across the dunes. For this scene a fake snake was used. Stiles and his men catch up to them in the desert and as they surround our heroes, Pecos, Paul and John Henry start speaking their own legends. Stiles takes the deed and Daniel sadly believes they are defeated and that these heroes are only the tall tales made up by his dad. In the confusion and heat, Daniel has an hallucination where he sees his father working on the railroad. He screams and wakes up to find himself in the rowboat still tied to the dock as in the beginning of the film. When Daniel tells his parents about his adventure, his parents tell him he was just dreaming. Daniel wants to fight the railroad barons and goes to confront them. Stiles is seen stroking his cat while enjoying his ill-gotten power. As he orders the train to run Daniel down, suddenly, we see John Henry holding back the train, Pecos Bill holding Stiles and his gang at gun point, and Paul Bunyan who is busy tearing down the train tunnel. The other farmers join them, Stiles is defeated and left buried in the tunnel and Daniel saves the farm. In a revealing ending moment, his three legendary friends appear to him and to his dad as well. Pecos gives Daniel his horse, Widow Maker, and Daniel rides off across the fields as Pecos rides off into a cyclone.