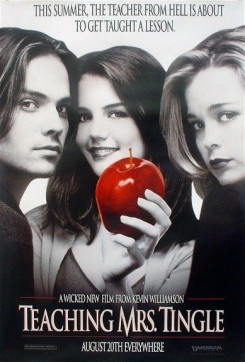 In this dark comedy, Mrs. Tingle is hated by the students as well as the faculty at the high school where she teaches. A student gets a grade she doesn't deserve and goes with some friends, to pay Mrs. Tingle a visit at home to persuade her to change her mind. Things get out of control and Mrs. Tingle is held captive in her own house by these students.

Although Mrs. Tingle isn't a likable character, her dog certainly is. Two different dogs were alternated throughout the filming. The breed of dog is Brussels Griffon.

The dog appears at Mrs. Tingle's side in several scenes throughout the film. His trainer was always standing just off camera giving him a combination of verbal and hand commands, which made him jump up, lie on his back, run from point A to B, yawn, bark or growl. In a scene where the dog licks some peanut butter off the actor's hand, the dog is a natural! The dog was picked up by the actor and set down gently on a window seat. In a separate scene, the actor places the dog on the ground.

In a very brief scene, it seems as though the dog is tugging at the actor's pant leg. When this scene was filmed, the dog was actually tugging at a pair of pants that the trainer was holding while standing just off camera. This scene was made to look realistic in the editing room!