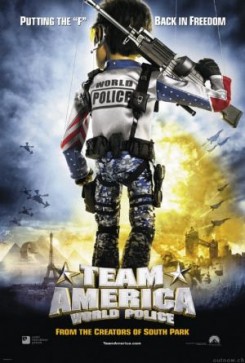 Team America, an international police force dedicated to maintaining global stability, learns that a power-hungry dictator is brokering weapons of destruction to terrorists. To infiltrate the terrorist network, Team America recruits Gary Johnston, a rising star on Broadway to go undercover. Although initially reluctant to sacrifice his promising career, Gary realizes that his acting gifts are needed for a higher cause.

Although they were identified onscreen as "panthers," it was two black house cats that carried out the attack on the puppets. The sequence was filmed in several separate shots combined in post-production. To simulate the "attack," trainers tied pieces of chicken inside the necks of the puppets and verbally cued the cats to "find the chicken." The cats were filmed one at a time as they tackled the puppets.

For shots of the cats crashing through a window, a trainer released each animal from its crate and cued it to jump about three feet to a second crate secured to the floor. The breaking of the glass was filmed separately and without any felines present; the special-effects wizards in post-production made it appear otherwise.

Two nurse sharks were used in the scenes at Kim Jong's palace. Frozen squid sewn into a puppet enticed the sharks when Hans was dropped in the water. The shark tank was supplied and maintained by Living Art Aquatic Company.

American Humane's Certified Animal Safety Representative consulted with the insect wrangler who trained a cockroach to walk up a ramp and onto a toy airplane for one scene.