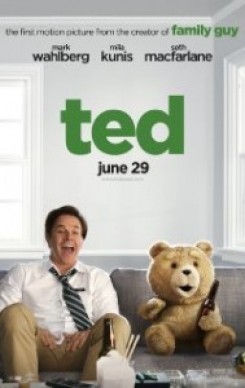 Ted chronicles the friendship between a man and his teddy bear who came to life after a boyhood wish comes true.

Although there are people who might believe that the character of Ted, the teddy bear that comes to life (in the movie aptly titled Ted) is in fact a real animal, the American Humane Association is here to tell you that Ted was all CGI and needed no protection on set (although he’d be a great spokesman for us).

We first meet Ted when a neighborhood dog runs onto a lawn and picks up him up in his jaws. This was accomplished by trainers placing treats inside a stuffed bear and cuing the dog to pick him up.

In the picture where we see two actors on horseback and the teddy bear sitting on a dog as if it were his horse, Ted was merely photoshopped on the dog.

In the scene at the aquarium where we see various fish swimming behind the glass, production shot on location at the Boston Aquarium.

There are lots of parties in Ted. One party that comes to mind involves an actor walking into a party holding a duck. Actor rehearsed with the duck prior to shooting so he was comfortable with the required action.

As you would expect, Ted and the duck get into a brawl at the aforementioned party. Scene involves Ted circling the duck with his fists up like a boxer’s, while the duck lunges at him, pecking at him. This scene was executed by using an animatronic duck which production provided documentation for. No real ducks fought with Teddy Bears in the making of this film.

The scenes with real ducks swimming in the pond, a bird flying outside an office window and the actor feeding ducks, the animals were merely caught in their natural habitat.