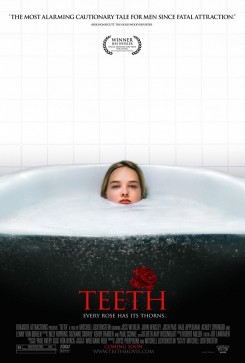 An old legend has it that a young woman has been equipped with a pair of teeth near her sexual organs. When a high school student is violated by an abusive male, she discovers that she is the woman of this legend, and that the teeth can be used as her weapon.

Brad (John Hensley) owns a pet Rottweiler named Mother. The part of Mother was played by a 6-year-old female Rottweiler named Aspen, who, off camera, is a search-and-rescue and therapy dog. Before any scenes with Aspen were filmed, the grounds were inspected by both the trainer and an American Humane Safety Representative. In addition, only essential crew members were allowed on set and they were all instructed on how to handle Aspen before filming began.

In one scene, Brad and his father begin to fight. Brad opens a cage door to release Mother. The dog runs out and lunges at the father, knocking him to the ground and standing over him until Brad tells Mother to go back in her cage.

This scene was filmed in several separate shots and edited together in post production. A trainer placed the dog inside the cage. He then stood off camera and used a combination of hand signals and verbal cues to get the dog to achieve the action. The actor and the well-rehearsed dog were introduced to each other and all were comfortable with each other and the action. For the lunging part of the scene, the actor cued the dog to jump on him by placing his hands on his chest and calling the dog. For the part of the scene in which the actor is down, he laid on the ground with peanut butter on his neck. The trainer placed the dog over the actor and cued the dog to lick the peanut butter, making it appear as if the dog was biting the actor.

Later, Dawn (Jess Weixler) and Brad have a sexual encounter near Mother's cage. The dog exits the cage and picks up a severed body part, appearing to eat it and then spit part of it out. This scene was shot in separate shots and edited together later. The trainer placed the dog on his mark and, standing off camera, used a combination of hand signals and verbal cues to achieve the action. The body part was made out of a sausage and a mushroom colored with food coloring.

At some points in the film, Brad smokes around the dog. On these occasions, the smoke was mild and the cigarettes were herbal.

In another scene, crabs crawl over a severed body part on a rock near a waterfall. Five blue crabs had one end of a monofilament line loosely tied to their claws. The other end was attached to the edible fake body part, which was made of gelatin. Trainers stood just off camera to retrieve the crabs afterwards. Only essential crew members were allowed on set during filming.