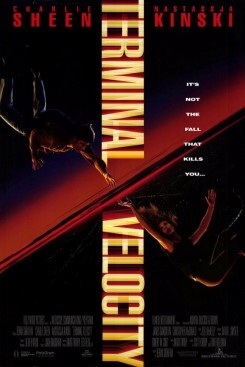 Terminal Velocity is an action adventure movie. Ditch, a handsome, young, government agent who skydives, has been assigned to locate a missing cargo plane full of gold bars worth approximately $600,000,000. Krista, a beautiful, young, former KGB agent also wants to recover the gold which was originally stolen from the USSR. When their paths meet, Ditch and Krista team up in search of the plane.

Their investigation leads them to an apartment building where one of their allies lives, but before Ditch and Krista have a chance to speak with the woman, a couple of unsavory characters, also looking for the gold, arrive and beat the woman after she refuses to give them any information. During their struggle, they shove her head to the bottom of a fish tank. Shortly after that, Ditch and Krista arrive and find the woman dead with her head in the tank. To accomplish this scene, a shot of the aquarium with real fish was established as background. However, prior to the murder, fake fish were put into the tank. Later, another fish tank explodes during a battle with the thieves as they attempt to locate the same gold-filled cargo plane. As in the previous scene, the live fish were in the aquarium as an establishing shot. Fake fish replaced the live ones prior to the explosion. In another scene, to avoid being shot, Ditch climbs up the side of a grain silo and slides down the shoot. As he emerges to the ground, a few pigeons appear to fly out of the shoot as well. To accomplish this scene, the trainer simply stood behind the shoot and released the birds. The angle of the camera made it appear that the birds were inside the shoot. In another scene, on their way to the airport, we see pigeons in the background, sitting on some telephone wires. Ditch and Krista discussed their personal lives and their family backgrounds. Krista spoke fondly of her family in Moscow and of her special three-legged dog. In the end, Krista and Ditch, are called to Moscow for commendations. Krista's entire family is there, including her three-legged dog. The dog used in this scene had been born with only three legs.