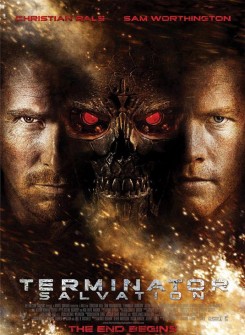 In the future, after machines have devastated the earth in a nuclear attack, John Connor (Christian Bale) must lead a group of human survivors to prevent the machines from killing the rest of the survivors.

Goats and Chickens During one attack scene, some goats and chickens are barely visible in the background. These animals were filmed seperately and were never near any explosions, gunfire or loud noises, which were added in post-production. The trainers checked the area to make sure it was safe for the animals. Trainers also put up fencing to contain the animals in case they decided to wander off, which they never did. The chickens were placed on the ground and some food was scattered around to entice them to stay. Then trainers placed the goats on their marks and stood off-camera holding buckets of food to get the goats to look and walk in certain directions. Dogs Several men, some with dogs on leashes, search the woods for Marcus (Sam Worthington) and find John Connor (Christian Bale) standing near a river. Small fires are seen nearby and in the trees. The grounds were checked ahead of time for hazards and the trainers doubled as the actors. The fire was added later in post-production. The river was actually a shallow pond made by the production and the animals were never near it. The actors were well-rehearsed on how to handle the dogs on leashes, and the scene involved mild action that the dogs were accustomed to.