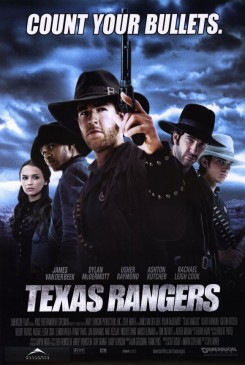 A ragtag group of youngsters band together after the American Civil War to form the Texas Rangers, a group charged with the dangerous, ruthless duty of cleaning up the West.

When teams of horses pull wagons or carriages, wranglers doubled as actors and drove the teams. Also, ten specially trained stunt horses performed scenes requiring rearing, bucking, or falling down during battle sequences. The horses were trained with verbal cues to rear, jump, run, stop, and fall down. A trainer hid off-camera cueing the bucking horse to execute different stunts. The 10 stunt horses were only ridden by experienced trainers and stuntmen, and were rotated throughout the filming of these scenes to prevent overexertion or exhaustion.

Approximately 200 Longhorns were used during the herding sequences. Perimeter fences were placed in case any cattle or horses decided to wander. Wranglers were posted around the outside of the set and doubled as actors on horseback to help steer the cattle to a nearby holding pen. All of the grounds were checked beforehand and cleared of any debris. Any holes in the dirt were filled in and the river was checked and cleared of debris.

All gunfire was shot at least 50 yards from any animal and guns were only filled with quarter-loads (of gunpowder), reducing the noise level and percussion of the shots. Wranglers were close at hand, watching the horses carefully, ensuring they were not bothered or spooked by the noise.

The chickens had their own wranglers and were seen in several scenes running around. The wranglers released the chickens and stood off-camera to retrieve them once the scene was filmed. A fence around the set ensured that no chickens wandered off.

A caged tiger is pulled by a team of horses and later, coyotes walk in the desert in another scene. Trainers ensured that the animals were safe during filming.