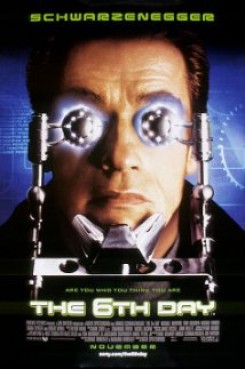 This thriller is set ten years into the future. Arnold Schwarzenegger plays a helicopter pilot who is prompted by his wife to have their family pet cloned so their daughter will not have to grieve its death. He ultimately decides not to clone the dog and to instead explain the circle of life to his child. But back at home, he finds out that the family pet is not the only potential clone in the house.

Oliver, the family's pet dog, is featured in several different scenes throughout the film. We see the dog lying on the couch and also standing on the couch looking out the window. The trainer put the dog on its mark and used hand signals to get the dog to achieve the action desired.

There is a scene where three Dobermans surround a woman and her daughter and bark and growl at them. Two trainers put the dogs on their marks around the actors and then used hand signals to make the dogs growl and bark as they stood off camera.

Near the end of the film, the trainer handed a cat to Schwarzenegger, who carried it in the scene. The trainer stood off camera and retrieved the cat when the scene was over.