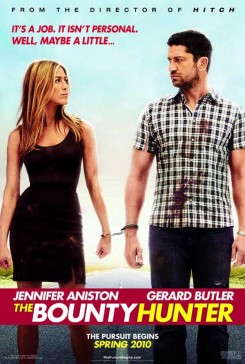 Milo Boyd (Gerard Butler) is a bail enforcement bounty hunter. When he gets an assignment to bring in his ex-wife, he holds her captive, and the bickering twosome have to work together to outrun several bad guys.

The dog seen on the sidewalk in the background of one scene was simply walked on a leash by an actor who had been handed the leash right before filming and instructed on the dog's proper handling.

The scene in which Nicole (Jennifer Aniston) hits a cat with a picture frame was filmed in separate shots. First, a prop cat with a string attached to it was placed on a cat tree and pulled out right as the actress hit it with the frame. Then a live cat replaced the fake cat on the ground and trainers cued it to walk from one point to another. The cat was then cued to sit under a chair.

For scenes in which horses are seen in the background, walking or standing, the horses were filmed at a closed (off-season) race track. They were well-trained horses accustomed to performing the mild action, most of which involved doing whatever came naturally. The jockeys and groomers were both costumed trainers and actual groomers.

Due to limited resources or late notification, American Humane did not monitor any of the horse racing action.