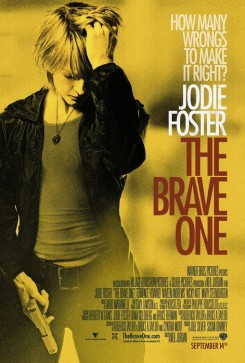 A tough-yet-tender New York woman, Erica Bain (Jodie Foster) and her fiancé, David (Naveen Andrews), are senselessly attacked by several gang members, who severely injure her and kill her fiancé. Discovering that the police are no help, she takes justice into her own hands and searches the streets for these men so she can have her revenge.

Two Belgian Malinois named Sloth and Butch were alternated in the part of Curtis, the beloved pet of Erica (Foster) and David (Andrews). Both dogs were introduced to the actors and crew before filming began. Only necessary cast and crew were on the set when filming with the dogs. Erica and David walk Curtis on a leash out of the building and down the street. For this shot, a trainer held the dog's leash just inside the building's doorway and handed it to the actor right before filming began. The street was closed off to traffic and off-screen trainers walked with the actors and the dog to the park. David plays fetch with Curtis in the park. The actor threw the ball toward an off-screen trainer and the dog ran to retrieve the ball. The trainer then took the leash just off-camera and held the dog for a moment before sending him back to the actor. The actor and dog had a lot of rehearsal time together, so the dog was accustomed to obeying commands from the actor. While walking through a pedestrian tunnel in the park, Curtis runs ahead and the couple follow. A trainer called the dog to run ahead of the couple and retrieved him off-screen. As the couple approaches the dog, who is now at the other end of the tunnel, they see that Curtis' leash is tied to a sign and a man is holding a section of the leash. The man suddenly attacks the couple and the dog barks and growls. One trainer handed the dog to the actor right before filming began and stood just behind the cameraman, waving a toy to get the dog to bark and growl. Another trainer held the leash and hid behind the sign, making it appear as if the dog was tied to the sign and straining on the leash.

Later, Erica discovers the location of the men, who still have the dog. In a series of scenes, she searches their hideout and shoots at the thugs, trying to retrieve her dog. This sequence was filmed in separate shots and edited together in post-production. For these scenes, a trainer put the dog on his mark and stood just off-camera. The trainer then used a combination of verbal cues and hand signals to get the dog to walk or bark or look in various directions. The gunshot action was pantomimed and the noises of the gunfire were added in later.