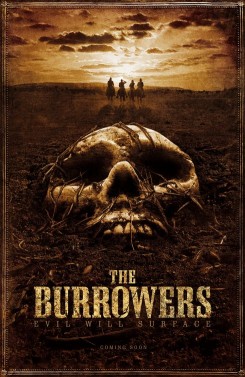 When a family mysteriously vanishes, a group of fearless men set out to find the people responsible.

The grounds were checked for safety ahead of time and camera angles made the terrain look steeper than it was. All actors and crew members were instructed on the handling of the horses and given riding lessons before filming began. Only necessary cast and crew were allowed on set. All gunfire was quarter-load blanks. Experienced wranglers or stunt riders doubled as the actors whenever possible. All horses hitched to wagons were handled by wranglers who doubled as the drivers. All wagons had brakes controlled by the experienced drivers and were loaded with lightweight loads or were empty. Horse seen in the background were either led by actors or tied to ground ties or fence posts. Rearing and falling were trained behaviors done with experienced riders doubling as the actors. Several wranglers (some on foot, some on horseback) surrounded the set in case they needed to retrieve any horses that might run off, which none did.

In one scene, a horse rears up and the rider falls off. Then as an Indian begins to mount his horse, a man shoots the horse and the horse and rider fall down. This scene was filmed in separate shots. Riders were experienced stuntmen and the horse was trained, cued and accustomed to performing the rearing and falling behavior. Nearby wranglers retrieved the horses afterward.

In another fight sequence, some riders are shot off their horses. Then a horse is shot in the neck, causing it to fall dead and trap its rider underneath it. Again, stunt riders were used for these scenes, which were filmed in separate shots. The horses ran to nearby wranglers after their riders fell off them. The horse that appears to be shot in the neck was wearing a blood squib pack that the rider set off when it cued the horse to go down. The rider "fell" down with the horse in a choreographed lying-down, and then the real horse was removed and replaced with a fake prop horse, which was placed on top of the actor to complete the scene.

A big blackbird flies onto a dead body and begins to peck at it. The bird was tethered with wire attached to a black leather leg band, and an off-camera trainer held the wire. Some food was placed around the prop body to entice the bird to peck. A trainer cued the bird to fly onto the body and back by using a clicker and verbal cues.

In one scene, ants are crawling in holes and later, when a hand picks up some dirt in the holes, it also picks up an eyeball with some ants on it. The ants were placed in the dirt after some shallow holes were dug. The trainer's hands were the hands shown holding some dirt, a prop eyeball and some ants.

Production provided documentation for the stock footage it purchased of the buffalo herd seen in one scene.