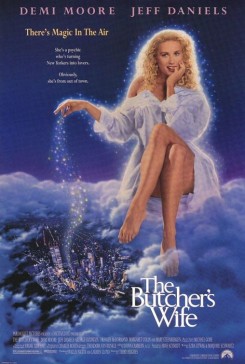 Marina, a clairvoyant, has lived with her Grandmother on a small island off of the Carolinas all of her life. She believes that, because of her powers to see into the future and the past, her prince will soon arrive and take her away with him. Unfortunately, all she has seen in her visions so far has been his smile. One day, while looking out over the sea, Marina spots a man rowing towards shore. She knows, or at least thinks she does, that this is her prince and races to the beach to greet him. As he approaches, Marina jumps into his boat and smothers him with kisses of joy. The very surprised man, Leo Lemke, is overwhelmed by this beautiful young woman. Being a rather large frumpy butcher from New York, Leo, in his glory, marries Marina and takes her back to New York with him...just as Marina had predicted. Once arriving in New York, Marina meets all of Leo's neighbors, customers and friends, including the neighborhood psychiatrist, Alex. She immediately starts to "help" , with the aid of her clairvoyancy, all whom she comes in contact with. This is quite disturbing to Alex, as Marina is helping his patients more that he is able to, and also causing general chaos in the neighborhood. Leo becomes concerned with his wife's actions, and believes that he has made a mistake by getting married. He asks Alex to take Marina in as a patient to see if he can find out what causes Marina "to be a little nuts". During their sessions Alex and Marina start to become very close. This closeness causes Marina to discover that she has found her prince, not Leo, but Alex, and it had been his smile she had seen in her vision! Now Marina, realizing her mistake, must rectify the situation by finding Leo another mate.

Animal action is mild. In one scene Eugene, a boy who has a crush on Marina, brings a small gift box to her. She opens the box to reveal a baby chick. Marina takes the chick out of the box and pets it's head. The chick was placed in the ventilated box right before this scene was shot and was under no duress. In another scene one of the neighbors gives a box to Leo to give to Marina which supposedly contains a love charm. When the box is opened, we see that the contents is a dead frog on a thin rope to be worn around the neck. This was a fake rubber frog. As background, pigeons are seen flying from a roof top.