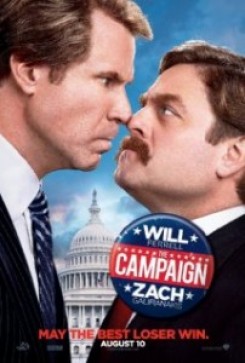 In this raucous comedy about a political race, several animals were featured which the American Humane Association monitored. In the opening of the movie, during one of Cam Brady’s (Will Ferrell) speeches, we see two goats standing on a pile of hay. Trainers were just off camera to make sure they remained still on the hay.

Throughout the film, Marty Huggins (Zach Galifianakis) has two pugs, seen performing such mild action as sitting/lying/eating, being held or petted, and walking/running on or off leash. For all of these scenes, trainers used hand signals and verbal commands to cue the mild action, which the trained dog was accustomed to performing. The barking/growling was also a trained behavior.

One scene that might perk the audience’s attention is when Cam Brady campaigns in a Pentecostal Church, specializing in snake dancing. In the scene, a parishioner brings a box of snakes out, hands several snakes to other parishioners before they go into a trancelike dance. Trainers prepared actors on how to hold non-venomous snakes, in particular how to dance with them and the kind of movement permitted. Some rubber snakes and puppet snakes were used for the scene where Cam gets bitten.

In the scene where Cam punches the famous dog Uggie at a rally, the punch was pantomimed and never came close to actually touching the dog. Uggie was placed on a chair, holding a bone in his mouth, which had a monofilament (synthetic thread) attached to it. The trainer tugged on the monofilament which gave the appearance of the dog’s head being slightly jerked to the side during a slow motion punch. After this scene, we see Uggie wearing a cone collar/bandage on his head. The cone was only used for a very short period of time and was removed when not shooting.

When Marty holds his dog in the air, trainers prepped the actor on how to hold the dog, and the dog was given treats after they cut film.

In the scene where Cam fake kicks the two pugs out of Marty’s house, trainers placed dogs on mark, had actor walk up behind them, and used clickers and to call the dogs to run from point A to point B. The actor never actually kicked the dogs.

In the scene where Cam is driving and hits the cow, the cow was computer generated.

The deer heads were from a taxidermist, production provided us with the correct documentation.