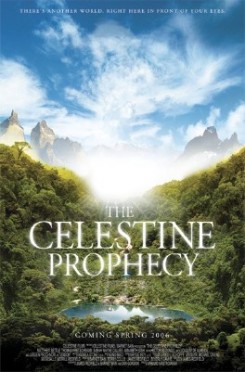 In this adaptation of James Redfield's popular New Age novel, a cynical John Woodson (Matthew Settle) embarks on an adventure in the Peruvian rainforest in search of ancient scrolls known as the Celestine Prophecy. Though skeptical at first, John eventually comes to the realization that he can discover his own destiny.

As John dreams in one sequence, riders on horseback fight with villagers on foot. Experienced stuntmen rode each of the well-rehearsed horses, and the choreographed clash involved prop swords and other weapons that posed no threat of injury to the animals. The Safety Representative monitoring the set checked the grounds and horses' pathways for holes and had the area cleared of debris as needed. As a precaution, production arranged for a police escort on each day of filming to bring the horses safely from base camp to the set.

In a few scenes, John's cat, "Meredith," sits on his desk, walks through the house, and is picked up and petted by her owner. A trainer put the cat on mark and stood just off camera using a combination of verbal cues and hand signals to solicit the action.

In one scene, Miguel (Obba Babatunde) pets an exotic bird as it sits on a perch in his house. This bird belonged to director Armand Mastroianni's daughter and was brought to the set for this brief shot.

Animals appearing in the background of a market scene were put on their marks by costumed trainers, who stood by their animals throughout the shot.

As a jeep travels down a road, a man pulling a donkey with a rope moves to the side to let the vehicle pass. This man and his donkey were not hired by the production and were filmed naturally as they walked. The koi that swim in a pond in one scene were also filmed in their natural habitat.

Moments before the rebels come and fighting breaks out with gunshots and explosions, caged chickens can be seen. Trainers checked the cages for sharp edges or other hazards before placing the chickens inside, and they removed the birds from the set before the use of ammunition began.