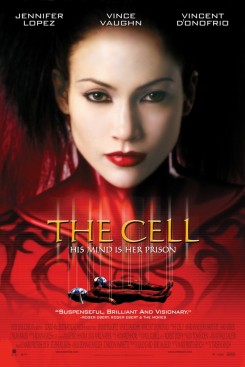 The Cell is a science fiction tale that propels a scientist, Catherine (Jennifer Lopez), and the viewer into the mind of a serial killer. An experimental scientific procedure enables her to enter the mind of comatose patients, usually to help find answers to unlock their consciousness. When a serial killer falls into a coma before detectives can find his last known victim, Catherine is enlisted to enter the dark world of his mind to find the location of the "Cell" where he keeps and eventually kills the women who fall prey to his insanity.

There are several different species making cameo appearances in the fantasy world of the killer's mind and one companion animal that actually helps the police find him.

The killer, Stargher, owns a dog he loves and has named Valentine. The dog in the film is termed an albino, but was actually played by two dogs that were both white Malamute/Husky mixes. The lead dog's real name is Beau and his double was named Tim. The actions of the dog were very mild and consisted mostly of sitting, either in a truck riding beside the driver, in the research facility laying on the floor, or responding with barks and growls to the trainers hand signals.

Valentine's (Beau's) most unique behavior was to pretend to be injured. Stargher apparently teaches the dog to lay down behind cars and appear as if it has been hit. This ploy used on young women, gets them out of their cars so he can abduct them. In the film, a young woman is backing up in a deserted garage and hears a whine. She looks out of her car to see the dog seemingly hurt. The dog's legs are twitching and it is whining and lifting its head as if crying for help. As she kneels to help the apparently injured dog the killer makes his move. The dog having done what it was trained to do, simply gets up and walks back to the kidnapping vehicle, along with his owner and the victim. For this scene, Beau was trained to lie on his side and move his legs as if hurt. The trainer was off camera cueing the dog with hand and voice commands.

There is a scene where the dog is seen as a puppy. For this, a 21/2 month -old puppy named "Little Timmy" was used. The puppy was placed by the trainer and cued to go from A to B. The only other dog appearing in the film is black and wet, seen walking A to B and shaking off liquid. The scene was shot in slow motion, which makes the release of liquid appear excessive. A naturally black dog whose coat was enhanced by non-toxic black dye was used for the scene.

A horse is featured in several scenes in the film. As the film opens, Lopez is seen as a visionary figure dressed in a diaphanous white gown astride a beautiful dark horse. She gallops over dramatic dunes to reach a boy inside his mind, inside his coma. For this scene, production traveled to Africa where a horse that was accustomed to the terrain was used. In the spirit of fantasy that characterizes this film, the live horse becomes a magnificent statue of itself thanks to the magic of the visual effects team.

In another powerful scene, visual effects was again called upon to transform a horse. For this a Buckskin horse was used. As Lopez approaches the inner child of the killer, the boy in this fantasy world is stroking the neck of a horse. The animal appears to be standing still in a museum gallery-like room. In a startling turn, sheets of glass drop from the ceiling and the horse is dissected vertically into separate body sections preserved in a row of glass dividers. For this scene, the staging area had rubber mats provided for safe footing. The horse merely had to stand, however air conditioning was boosted to offset the heat emitted from the lights needed for filming on the confined stage. CGI, computer generated images, were utilized to create the startling end product. The visual effects team photographed and filmed the horse from every conceivable angle and used lots of camera's to gather the raw material needed to build the effect.

As the killer's mind is probed, his dark fantasy world becomes more vivid, filled with creatures and inhabited by the transformed doll-like victims of his crimes. In one scene a Python and Corn snake were used in a pool that floats the master's elaborate cape. The trainer placed the snakes in a pool where the water temperature was kept appropriately cool. The snakes swam from A to B. Any hole in the pool that might have been a potential trap for the snake was blocked off.

In other brief scenes peacocks are featured. They were tethered to keep them from roaming into dangerous areas on the set. The birds were conditioned to these tethers in pre-production and over a lengthy period of time. They were also kept misted to remain cool.

Other brief appearances were made by a Vulture on perch, placed by the trainer. The perch, 9 feet high and 2 feet wide, was baited to encourage the bird to stay. Plenty of air conditioning was supplied to keep the bird cool. In several other scenes, insects are featured. A professional bug wrangler placed and retrieved the spider, roaches, cricket and millipede. In an early scene a turtle is moving in a wheat field at his own pace…verrrry slowly.