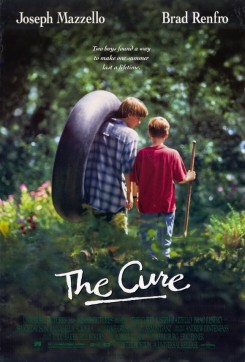 The Cure is a poignant story of Erik and his friend Dexter, a gentle 11 year old, who has contacted AIDS through a blood transfusion. Dexter (Dex for short) lives in the house behind Erik and they get to know each other through the fence. One day Erik asks Dex if he can get AIDS through the cracks in the fence to which Dex replies "It can't be spread through the air". With that, Erik jumps the fence and begins to help Dex build his mud fort. They quickly become best friends, even though Erik takes a great deal of ridicule from the bullies at school. They refer to Dex as a faggot. Shortly after they become friends, Erik decides that he is going to find the cure for AIDS. He starts with candy. Dex has not had much candy because of his condition, so Erik decides that the lack of candy is probably why Dex has AIDS. Of course, Dex wonders why Erik has to eat candy too, but he just laughs. Erik's next idea for a cure is through experimenting with various leaves they find. After they have collected several different leaves, Erik pours hot water into a cup for tea. Erik takes Dex's temperature before and after Dex drinks the tea, and jots it down in a log book. Most of the leaves have no effect one way or the other, but when Dex's stomach starts bothering him, they decide to stop experimenting with the leaves. Erik tries to think of another way to cure Dex. A few days later, while they are in the grocery store buying more candy, Erik and Dex read in the tabloids about a cure for AIDS that has been found in New Orleans by a Dr. Fishburn. Erik is determined to get Dex to New Orleans. Erik's father lives in New Orleans with his current girlfriend. Erik feels certain that he and Dex can stay with them.. However, Erik's mother gets in the way. Completely ignorant about AIDS, she automatically assumes that Erik will get sick and pass it on to her. She forbids Erik from seeing his friend. However, Erik's mother works long hours, so has no idea what her son is doing. Keeping this in mind, Erik goes to Dex's house the next evening and convinces him to go to New Orleans. After leaving a note for Dex's mom, the two take off down the river in a raft. It is the adventure of Dex's life and they have a wonderful time. They quickly realize it will take forever to get to New Orleans on the raft, so they hitch a ride on a cabin cruiser headed there. Prior to arriving in New Orleans, Dex takes a turn for the worse, so Erik steals $300 from the guys on the boat, and the two of them get on a bus headed back home.

As the boys are building Dex's mud fort, a frog stands nearby. At one point, Erik picks up the frog and places it out of the way on the lawn. The frog then hops away. The frog was the property of the Minnesota Zoo, and was supervised by zookeeper, Karen Walstrom. In a scene where the boys are in Dex's room writing in the log book, a cat is seen jumping off the bed where he has been lying. The cat is in a few more scenes as background only. A man is also seen walking his dog in the background.