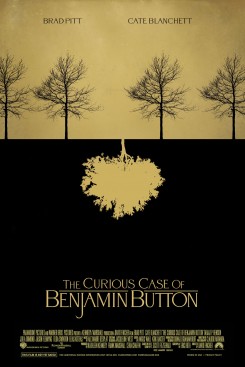 Curious Case of Benjamin Button, The

Benjamin Button (Brad Pitt) is born an old man in an infant's body. As he grows older, he becomes younger. He must learn how to cope in society when society does not know how to cope with him.

A woman and her dog arrive at the special home where Benjamin lives. The woman's dog is seen lying on the floor near her in a couple of scenes. Then after the woman dies, the dog stays at the house with the other guests, including Benjamin. The dog is seen in several scenes lying on the porch and inside the house, on the floor. The dog also walks with or sits by actors who pet it. The set was open to only necessary cast and crew. Before filming, the grounds were inspected for safety, and the cast and crew were introduced to the dog and instructed on its proper handling. Two trainers were on the set with the dog. At the woman's funeral, the dog sits near the grave with Benjamin as the other people leave. The dog waits for Benjamin and walks through the cemetery with him. A trainer put the dog on its mark and cued it to stay. Another trainer then cued the dog to walk toward him as the dog and actor leave together.

Throughout the film, Mr. Daws (Ted Manson) tells the story about how he was struck by lightning. Each time he tells the story it is different, and a black-and-white "flashback" of his story is shown. In one story, he is walking a dog on a leash down a dirt road when lightning strikes him. The trainer handed the leash to the actor right before filming began. The actor then discreetly triggered special effect smoke packs (placed inside his jacket before filming) and then fell to the ground, as if struck by lightning. The dog was removed from the area and away from the smoke immediately. In another story, Mr. Daws is driving down a dirt road with his dog inside the truck when lightning strikes the truck. Trainers placed the dog inside the truck right before filming began. The truck was driven slowly for a short distance and trainers removed the dog as soon as the smoke was released. In yet another story, Daws runs in a field past a few cows and is struck by lightning. The cows were placed on their marks in the field, where food had been scattered to get them to stay. The actor was introduced to the animals and instructed on their handling before filming began.

The hummingbird in the film was computer-generated.

Due to late notification or limited resources, American Humane did not monitor some of the dog action or any of the horse or mouse action.