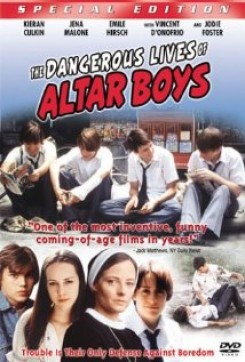 Dangerous Lives of Altar Boys, The

Set in 1974, a mischievous group of young boys create an explicit comic book and are caught by their strict Catholic School teacher, played by Jodie Foster. The boys plot to retrieve their masterpiece before it is destroyed.

Determined to become local legends, the boys attempt to steal an unsuspecting cougar after visiting a local zoo for a school trip. They watch the cougar lying down on the ground and walking about from a small bridge above its pen. Two male cougars were used in the film, Kelsey, 10 years old, and Jr., who is 2 years old. A trainer led one of the cats into the zoo-like cage that was built specifically for the film and stood outside of the enclosure when the cameras rolled. The trainer would then verbally cue either Kelsey or Jr. to lay down or come, using a clicker to keep the animal's eyeline. While the cats were working, only the necessary crew and cast members were permitted on set. To prompt the cat to look up at the cast on the bridge above the pen, a trainer also stood on the bridge and waved a plush toy to get the cougar's attention.

As the kids hatch their plan to steal the cougar, they decide to test out a homemade mixture of "NyQuil goop" on a domestic cat before using it to tranquilize the cougar. They place the mixture on the ground and the cat licks it up. Three brown Tabby cats shared the role of the NyQuil-eating kitty, Sasha, 4 years old, and Slick and Percy, who are both 6. The green goop was actually a tasty—and non-toxic—combo of chicken baby food, tuna, and green food coloring.

Later, the boys sneak back into the zoo to capture the cougar. One boy tosses a piece of food inside the cat's pen, which it eats. The kids then shine a flashlight on the animal and shoot it with a dart laced with the Nyquil concoction. The injured cat hobbles over and lies down, and one of the boys gently pets it. An animatronic cougar was used in addition to the live animals for this intense scene. When the animal is shot with the dart, the animatronic cat was used to simulate the impact. Two puppeteers were on hand to control the fake animal, and mainly moved its head, neck, mouth, eyes, and ears. The real cougar took part in the action by walking around with a fake dart attached to its hind leg with surgical glue. The cat that the boy petted was animatronic.

As the boy caresses the wounded cougar, another cougar suddenly springs out of the background and attacks the boy. The boy's friend whacks the animal with a sack and it runs off. The attacking cougar was also animatronic, and the scene was intercut with images of the real cougar running away from the camera, unharmed.

The boys find a dog lying on the side of the road, clinging onto life. It has a bloody gash in its body. They pick it up and struggle to carry it to safety, but it dies in their arms. They lay it back on the ground. Five year-old Bean, a female Cattle Dog Mix, played the part of the fatally injured canine. Bean, a shelter rescue, was made-up with fake blood and verbally cued by her trainer to lie still while the actor lifted her off the ground. A stuffie dog was also tried out when Bean got excited by all the attention. In addition, police blocked traffic to ensure that the road was safe for filming.