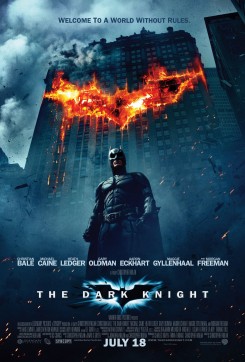 With Batman (Christian Bale), Lt. Jim Gordon (Gary Oldman) and District Attorney Harvey Dent (Aaron Eckhart) teaming up and taking down criminals, the city of Gotham has started to clean up the mayhem that once plagued the streets. But Batman may have met his match against The Joker's (Heath Ledger) psychotic criminal plots to terrorize the city.

Before filming began, cast and crew members attended safety meetings, were introduced to the animals and were instructed on the animals' proper handling. Only necessary cast and crew were allowed on set during filming. All paths were checked ahead of time and any pieces of debris seen on the ground in the film were props that were safe for the animals, such as candy glass and balsa wood pieces. Animals were never near gunfire.

Batman appears in a parking garage one night and fights some gangsters and their dogs. Dogs are seen in the back of a parked van. For this scene, two costumed trainers serving as the bad guys inside the van opened the van door and cued the leashed dogs to jump out. Moments later, the trainers unleash the dogs, which lunge at a man. This footage was filmed in separate shots. To get the dogs to run off-leash, one trainer released them, and another trainer stood at the dogs' end mark, calling and retrieving them. The dogs were removed from the set before gunfire began.

For the running lunge portion of this scene, a trainer put a dog on its mark six feet from the base of a custom-made ramp. The trainer then moved the top of the ramp and held up a toy. The dog was verbally cued to run up the ramp and grab the toy from the trainer's hand. To make it appear as if the dog was attacking the actor, a camera was placed on the ground nearby as if showing the man's point of view. A trainer put the dog on a table and had it jump the short distance over the camera. Then dogs are seen biting the man's feet and arms and dragging him off. For this shot, a costumed trainer wearing a padded stunt outfit doubled for the actor. Three off-screen trainers held the dogs, then released them, and used a combination of verbal commands and hand signals to get them to "bite" the trainer in various spots. To make it look like the dogs were dragging the man, the man was hooked up to an unseen cable pulled by several off-screen stuntmen. Batman then picks up one of the dogs and tosses it away. This action was achieved using a fake dog.

For the scene in which The Joker appears to beat the dogs on top of Batman with a pipe, the dogs were fake. Moments later, when Batman tosses one of the dogs away, this well-choreographed scene actually involved a costumed trainer picking the dog up and gently tossing it a short distance onto thick padding that was placed on the ground before filming. The costumed trainer fully supported the dog's weight during this well-rehearsed scene.

Guards with bomb-sniffing dogs search the city for a bomb. Later, when several police officers pull up to a building to search for Batman, some of the officers have K-9 dogs on leashes. They unleash their dogs to chase Batman, who jumps on a bike and rides off. For these scenes, the dogs were with their handlers, who were in costume. Both dogs and trainers were well-rehearsed for this mild action. After chasing the bike a short distance, the dogs were called by two off-screen trainers who were waiting to retrieve and reward them.

Mounted police ride in a parade through the city streets. For this scene, the road was blocked off to traffic and the horses and riders were well-rehearsed for the action. As the mayor gives a eulogy, the honor guards shoot their guns. Suddenly, gunfire breaks out and the mayor is shot at. To soften the noise for the horses, the horses wore cotton in their ears and quarter loads were used in the guns. None of the horses were close to the gunfire at any time.