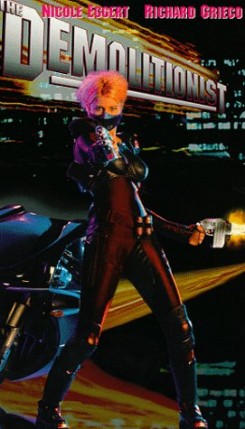 The Demolitionist is a futuristic action film about a female police detective who is transformed into a robotic avenger, part human and part laboratory creation. While their execution is actually in progress, two brothers and convicted killers, Mad Dog and Little Henry Burn, stage an escape from the prison and begin a killing rampage. Mad Dog is furious at Mayor Grimbaum, not only for imprisoning him to begin with, but because his brother, Henry, dies in the death row escape. He plans her assassination as the start of his reign of terror. Mad Dog and his band of degenerates are infiltrated by two police detectives, Alyssa and Dan, who are brutally tortured after being discovered. Dan ends up in a coma and Alyssa technically dies, but not before they successfully foil the assassination attempt. In fear and desperation, the Mayor greenlights the Lazarus Project. Professor Jack Crowley, who has developed the project, uses it to transform Alyssa into a robotic superwoman who becomes known as The Demolitionist. Crowley not only transforms her physically, but trains her in weaponry and combat. She is able to clean up the crime-riddled city and eventually avenge Dan's death by killing Mad Dog.

Animal action consists of a dog in one scene. Mad Dog holds a meeting in a church with a corrupt police official who is trying to gain an upper hand. Mad Dog brings in his "negotiator," a fierce doberman who growls, barks and lunges at the official's groin. Once the official is properly convinced of Mad Dog's point of view, the criminal commands the dog to quiet down and it does. Finally they all leave the church peacefully. For this scene, a trained attack doberman was used. He responded to his trainer's hand and voice commands. However, the dog was walked into the scene on a leash and remained on the leash throughout. He never actually made contact with the actor.