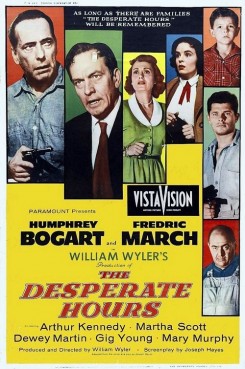 The Desperate Hours is a well-done update of the 1950's film in which Mickey Rourke plays the Humphrey Bogart role. In the 1990 version a sex-smitten female attorney aids the prison escape of a convicted murderer and two other inmates. The convicts seek refuge in the home of a middle-class family where they hold the family hostage and terrorize them.

There's minimal animal action with horses, and a deer that appears briefly in a courtyard. One of the convicts escapes into the forest with the police close behind. He stops briefly near a group of horses that are drinking from a river. The police snipers have him in their gunsights and the horses run off just before the gunfire starts. During the filming, the horses were herded out of the area and the action with the gunfire began about a half hour later with no horses near.