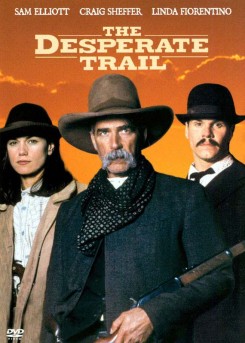 The Desperate Trail is a western which takes a stand on spousal abuse. The film deals with a man and woman who are traveling together by stagecoach and end up becoming partners - in crime. The woman, Sarah, is fleeing the sheriff whose son she married, but later killed after he continuously beat her. The man, Jack, is a bank robber who steals to help support his crippled brother. The two join together, first for money and freedom, but soon fall in love and realize that they are both fighting for a more moral and compassionate way of life.

Animal action is mild in the film with basic horse riding and background animal atmosphere throughout. In the opening scene, Sarah is in the custody of the sheriff on the stagecoach. Also riding on the stage is Jack, traveling back to his ranch where his crippled brother waits for him. Outlaws attack the stagecoach and shoot at the driver. The sheriff shoots back and the outlaw falls from his horse as the horse continues running off camera. The stagecoach is galloping at full speed to escape the outlaws and at one point the team of six horses and stage run over a fallen outlaw. The sheriff gets control of the team of horses and stops the stage. However, Sarah and Jack take advantage of the chaos and are able to make a getaway taking the Wells Fargo money from the stage with them. For this sequence, trained wranglers controlled the team of horses and a trained stunt man did the fall from the horse with wranglers on horseback off camera ready to catch the riderless horse. For the scene where the outlaw is run over by the stage, a trained stuntman was lying down in position on the opposite side of the team from the camera and the camera angle gave the shot the false illusion that the horses trampled the man. So as not to hurt the ears of the horses, quarter loads were used. In several scenes we see the sheriff and his posse riding out to catch up with Sarah and Jack, who have teamed up to get the money necessary to start new lives. In one scene, to escape the sheriff and posse, Sarah and Jack ride off together slowly on one horse. Eventually each gets their own horse. In all the scenes where there are gunfights between the sheriff's men and the fugitives, quarter loads were used to protect the horses' ears. In one shoot out sequence outside a dry goods store where Sarah and Jack have stopped for provisions, the crossfire causes a horse to run off. For this scene, the horse was loosely tied to the wagon and wranglers, just out of camera range, waved a flag at the horse as a cue to the horse to bolt and run away from the wagon. He ran a few feet to a waiting wrangler. The final showdown at Jack's ranch begins when the sheriff and his men beat Jack's innocent brother for information about Jack and Sarah. Jack and Sarah are headed back there to include his brother in their new life together when the gunfight ensues. Sarah and Jack realize that the posse is at the ranch and they ride in to save his brother. They manage to overcome the odds and kill the sheriff, although Jack's brother is also killed in the shoot out. No horses are seen during the fight sequence. Other animal action includes cattle seen in the background in a corral and wagons drawn by horses as town atmosphere.