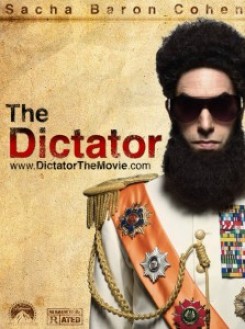 A comedic study of a dictator who ends up in NYC as an average citizen.

In the scene where the main character carries a baby goat into the limo, street was blocked off by production to prevent too much action. Actor was prepped by trainers on how to hold goat before rolling film.

In the scene where cows mill about a nuclear plant, the set was constructed to “look like” a nuclear plant, but of course was not. Production made sure set was “cow proofed,” meaning surfaces were carpeted, with shavings on top, and water and food was available off camera.

When we see a dog on a leash coming out of a store, an off-screen trainer stood off camera to retrieve the dog after filming took place.

In the scene where a goat stands on a coffee table in a hotel room, trainers cleared room of hazards, goat was prepped to be comfortable on small table, and treats were placed on the table to make sure goat stayed still.

In the scene where the goat stands outside a window sill and chews on a tight rope, the sill is actually a large balcony. Trainers used a bait stick and clicker to get the goat to gnaw on rope.

Due to late notification and/scheduling conflicts, American Humane Association did not monitor some of the goat action or any of the scenes with the camels.