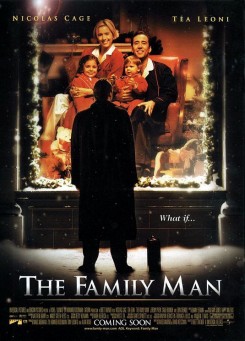 In this romantic comedy, Jack and Kate are college sweethearts who separate for a year after graduation. Jack goes off to London to do a business deal and Kate tries to stop him from boarding the plane. Thirteen years later Jack returns to New York, a successful investment banker. He is given the opportunity to see what life would have been like if he had not gotten on that plane thirteen years ago.

Three different dogs played various roles in the film. All of the actors were introduced to the dogs before filming began so the animals and the actors felt comfortable together. Two trainers and a veterinarian were on the set at all times.

The leading canine role went to Jack and Kate's family dog, Lucy. The part of Lucy was played by Ellis, a Mastiff Mix. Lucy's pivotal scenes require her to either lie on the couch or on the bed. Lucy does get some exercise, though, when Nicholas Cage walks her on a leash. A trainer put the pooch on her mark and used a combination of hand signals and verbal cues to direct her in the scene.

A Papillion dog named Georgia played Mrs. Peterson's cute little canine—a small, but memorable role. Georgia wore a sweater from her own wardrobe and was dressed by the trainer before the scene began. The trainer then handed the dog to the actress and retrieved her after the scene was shot.

Homer the dog also makes a brief appearance in the film. In Homer's big scene, Jack and Kate attend a party at his humble abode. As soon as the couple arrives, Homer races from inside the house to answer the door. For this, the trainer set the dog on his mark and verbally cued him to run through the room.