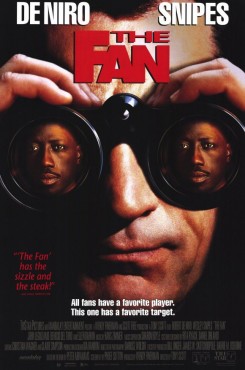 The Fan is a thriller about an obsessed baseball fan who has an unhealthy love of the game, the Giants and a particular star player, Bobby Rayburn. Gil Renard is such a fan of baseball that it costs him his job and his son. What he doesn't lose is his obsession for baseball, especially the Giants. This season the Giants have hired a star batter, Bobby Rayburn, for forty million dollars and his performance proves to be dismal. He blames some of his bad luck on another player, Primo, who will not give up wearing Bobby's lucky number, eleven. Gil, decides that as a fan he can do more for Bobby than just cheer. However, his chilling solutions make the final game of the season memorable in more ways than one.

A fake cockroach and several dogs are used in the film. In one scene, baseball star, Bobby Rayburn, meets his son at the airport with a gift hidden in his jacket. It turns out to be a puppy. We see the puppy grow up over the course of the baseball season and see him playing with Bobby's son in several scenes. This action is extremely mild and the dog was trained in pre-production to play with the boy. For the scene in the airport, the trainer placed the puppy into the actor's jacket. In one critical scene, Bobby's son is out paddling in the ocean on a boogie board when the grown dog swims out to join him. Inadvertently, the dog tips the board over and the boy starts to drown. Gil, who by now is stalking Bobby and his family, rushes into the ocean to save the boy's life and to ingratiate himself to the baseball star. The dog, filmed from under the surface of the water, is seen paddling hard. We soon see him running up onto the beach after Gil who is carrying the boy ashore. This scene was shot in cuts. Several dogs were trained over a five month period in pre-production to follow the boy, play with him and to swim and play in the water. During training, each dog used a specially designed wet suit that protected the body and kept the head, legs and hind quarter free. The scenes where the dog is seen from underwater were shot in a tank in a studio with two trainers present at all times. When the dog is seen trying to climb onto the board with the boy, the dog was taken out beyond the breaking waves by boat. Trainers were present in three boats and a stunt man doubled for the boy. The stunt man supported the dog on the board in-between takes. To make it appear as if the dog and boy were struggling, the stunt man had a ball and encouraged the dog in play behavior. For the moment when the dog is seen leaving the water and running onto shore, the dog had been carried into the water by one trainer, released and then called to shore by a second trainer. For all the action, the dogs were given food rewards. Later in the film, the dog is seen riding with Gil and the boy in a Hummer Jeep. A trainer was on the floor in the backseat of the moving vehicle, out of camera range, holding onto the dog's leash. The dog was able to hold his head outside the window, but was in no danger of jumping or falling out of the jeep. There is a scene in the film in which Gil is at home contemplating his next move when he sees a cockroach crawling up the door on the opposite side of the room. Being an expert with knives, he picks up a large knife and hurls it at the cockroach, pinning the insect and actually driving the blade through the door. A man who is holding a small dog in his arms happens to be walking past the door as the blade pops through and he scurries off camera. This sequence was shot in cuts. A fake cockroach was created by the prop department and an air blower which was held out of camera range was used to make the pinned insect look as if its' legs were still moving. At an earlier date during filming, a trainer placed the dog in the arms of the actor on the balcony and he walked past the door. No knife was actually thrown when the dog worked.