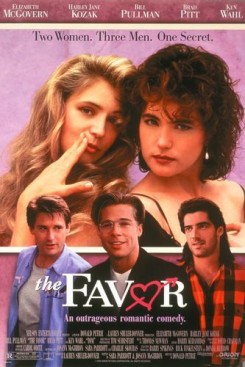 A housewife begins fantasizing about her first love after she receives an invitation to her fifteenth high school reunion. Kathy's day-dreaming becomes such an obsession that she asks her best friend Emily to do her a favor. Since Emily has just broken off with her much younger lover and will be taking a business trip to the old flame's town, Kathy asks Emily to look him up and "check him out". Kathy would like Emily to do her the favor of sleeping with Tom as the high school sweethearts had never consummated their relationship and now Kathy wonders what it might have been like. When an elated and pregnant Emily returns she tells Kathy that it was Kathy who did her the favor. This triggers an amusing series of events and misunderstandings.

The family dog is present in several scenes mostly as atmosphere. Kathy finally meets Tom, a rugged sportsman, at a dockside fish tournament where he is the judge. Several fish strung on lines are seen and the contest winner holds a large catfish by a line that is still stuck in it's mouth. The fish used in this scene were dead fish purchased from an Oregon seafood market where the scene was filmed. The production company supplied American Humane with a receipt from the market.