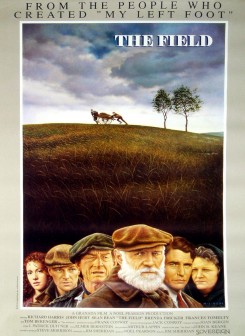 The central character of this Irish tragedy set in the 1930's is Bull McCabe. As his name implies, he's the strong and stubborn patriarch of a family that has leased a grassy field where their cattle have grazed for many years. Passionate about the land, McCabe regards this field as his birthright and his son has harassed the widow-owner into relinquishing it. When the widow puts the land up for auction, McCabe is confident it will be his at last, until an American businessman seeking his Irish roots challenges McCabe for the field. The two become locked in mortal combat and unleash a series of tragedies.

The Field opens and closes with graphic animal scenes. In the opening a dead donkey is dropped from a cart over the edge of a cliff into the ocean. An underwater close-up shows the donkey falling through the water. The donkey was not real, but constructed of fiberglass. During the film's climax, cattle and sheep are run over a steep cliff falling to their deaths on the shoreline below. This scene was shot in cuts. A camera was set in a shallow two foot ditch and the animals were filmed jumping over the ditch. In another shot, a few animals were filmed in slow motion falling through the air. Another scene shows several dead animals lying on the water's edge below the cliff. According to the producer, these animals were sedated by veterinarians and recovered fully. The Field was filmed in Ireland by an Irish production company. The producer states that the Irish S.P.C.A. was on the set and that no animals were harmed in the filming of The Field. However, we have learned that no official was on the set the day the cattle fell off the cliff. Even though the producer said they fell into water, it was apparent that they had not been trained to fall as some were falling upside down. This would have been against American Humane Guidelines had it been done in this country. Therefore, we are rating The Field "Unacceptable".