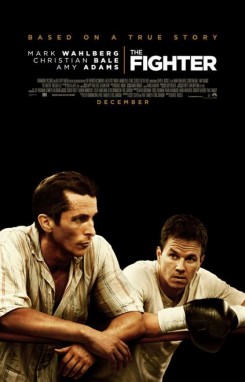 Based on a true story, boxer Micky Ward has to decide whether to let his crackhead, troublemaker brother train him in boxing or abandon his brother and mother for a more stable training environment.

Dickie's (Christian Bale) dog is seen in a few brief scenes performing such mild action as sitting/lying and being held. For this, trainers used hand signals and verbal commands to achieve the action, which the well-trained dog was accustomed to performing. The smoke in the room (including the smoke shown as the actor holds the crack pipe near the dog) was a water-based, nontoxic smoke that did not irritate the dog.

For the mild snake action, trainers brought in a nonvenomous snake, which the actor was instructed on handling. Trainers handed it to the actor moments before filming, allowed it to naturally crawl on the man's arm and then retrieved it right after.

This film is not carrying a disclaimer because it did not give American Humane a pre-release screening of the film, which is one of the requirements for issuing the disclaimer. However, an American Humane post-production staff member screened the film in the theater after it had opened and ultimately deemed the film worthy of the "No Animals Were Harmed"® disclaimer.