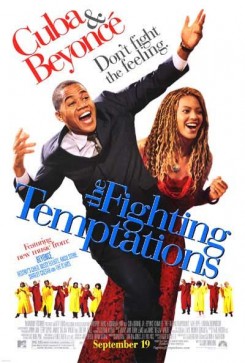 Darrin Hill (Cuba Gooding Jr.) is busy unsuccessfully conniving his way into the executive suites of a New York advertising agency when his aunt dies and he heads home. His aunt leaves him her legacy — the reigns of the church choir. The only thing standing in his way of the additional cash inheritance is leading the choir to a victory in the state choir competition. Unfortunately, the ragtag choir, made up of a single mom shunned by the church community, the barbershop quartet, a local alcoholic, and several inmates from the local prison is the ultimate test of his creative wrangling and moral fiber. They must all fight temptation and sing their hearts out to reap the rewards.

The only animals that made it into the film ended up in the end credit crawl. Outtakes show Darrin trying to catch a pig in its cozy mud pen. For the scene, trainers placed the pig in a corral that had lots of cool mud. The area outside the pen was also fenced off to keep the pigs from going too far astray. As Darrin flops around trying to grab the pig, the pig merely avoids him, take his cue from the trainers, and heads out the gate.

Another outtake has Darrin at a fishing hole where a dog lays in a boat that is grounded at the edge of the pond. As Darrin passed by, the dog was cued by the trainers to sit up and bark. Darrin is also seen taking what he thinks is a drink of water, only to get a mouthful of worms. The worms in the cup were fake and the ones that appear to be spit onto the ground were live worms filmed separately.