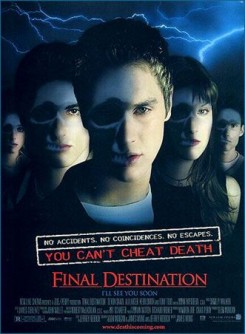 After a teenager's premonition saves him and his friends from a deadly accident at a race track, they soon realize that fate is trying to kill them and they try to figure out how to stop it.

A homeless man holds a Chihuahua in his jacket in two scenes. The actor and dog were introduced to each other and allowed to become familiar with each other before filming began. The trainer handed the dog to the well-rehearsed actor and instructed him on the dog's proper handling. Streets were closed off to traffic for a scene on a sidewalk, and actors and crew were kept quiet for a coffee shop scene, which took place in a secured studio. The trainer stood nearby during both scenes as a precaution.

While still holding the Chihuahua, the homeless man throws a coin into the street, causing several pigeons to fly up and away as if startled. Trainers brought homing pigeons to the closed-off street set in a special box with a quick-release lid. When the off-camera trainers released the flip-top lid, the pigeons flew out of the box, into camera frame and off to their loft home a few miles away. This sequence was repeated with a few different birds for a few different takes. All of the pigeons had bands on their legs to make sure they all made it home, and all were released during optimal peak travel times for the birds, so as not to risk weather issues or lack of sunlight. The coin toss was filmed separately, and no birds were actually startled by anything.