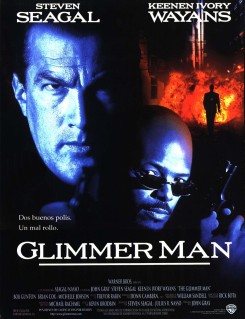 The Glimmer Man is a film about Jack Cole, a Lieutenant with the L.A. police department. Jack is assigned to a case involving a serial killer who kills his victims and then crucifies them. Jack becomes a suspect himself after his ex-wife and her new husband are found dead. It is now up to him and Cleary, his reluctant partner, to figure out who is behind the murders and why.

In one scene Jack goes back to a crime scene one night to look around for more clues. On one wall is a make-shift aviary with some doves inside. Before he knows what hit him, a figure jumps out of the shadows and Jack throws the mystery man into the aviary. Several birds are seen escaping. For this scene, the birds were in a very large cage. The section of the aviary that the stuntman is seen crashing into was devoid of any birds. To accomplish the effects of birds flying loose around the room, the trainers released a few birds directly in front of the camera and they flew to awaiting feed boxes. There were several trainers on set to retrieve any strays. Other animal action consists of a dog seen tied to the bumper of a parked car while Jack is walking up to the crime scene. The dog stands and barks at Jack's retreating figure. Also, while in an oriental herb shop there is a reference made to some dead roaches in a jar. The contents of the jar can not actually be seen. American Humane was present on set to monitor the animal action.