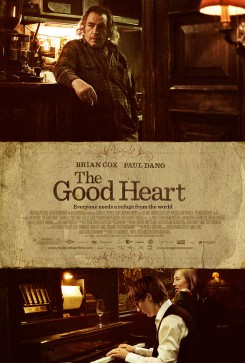 A bitter, elderly bar owner with health problems befriends a suicidal homeless man and takes him under his wing in hope of someday leaving his bar to him.

Although The Good Heart shows the language "No animals were hurt in the making of this movie" at the end of the film, American Humane's Film and Television Unit did not issue an official disclaimer to the film before the end credits were completed. This production did not give American Humane a pre-release screening of the film, which is one of the requirements for issuing the disclaimer. However, an American Humane Post-Production staff member screened the film in the theater after it had opened and ultimately issued a disclaimer that reads, "American Humane monitored some of the animal action. No animals were harmed® in those scenes." Due to late notification and/or limited resources, American Humane did not monitor all of the dog and duck action. For scenes in which the young man holds, cuddles or feeds a kitten, this mild action involved a combination of allowing the kitten to do whatever came naturally while trainers stood nearby and having the actor hold and pet the kitten per the trainers' instructions. The food fed to the kitten was part of its diet.

Trainers also cued the bulls and cattle in the background on the farm.

In a couple of brief scenes, Jacque's (Brian Cox) dog Rocco is walked on a leash in the city. Trainers cued this mild action, and the dog was on the leash the entire time. For the shot in which the dog exits a station wagon, trainers cued it to get out and follow the actor. The station wagon was not moving.

Production provided documentation for the stuffed kitten prop hanging from the noose.