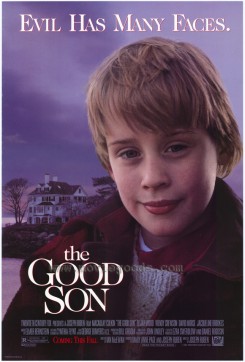 A young boy is profoundly effected by his mother's death and refuses to accept it. Mark's father is sensitive to his feelings and is deeply concerned about his son. Nevertheless, he must leave the boy for a few weeks while he goes to Tokyo to close an important business deal. He makes arrangements for Mark to stay with family in New England and decides to drive across country from Arizona so that they can have some special time together before their unavoidable separation. They arrive at Mark's aunt and uncle's home where they meet Mark's cousin, six year old Connie, and Henry, who is Mark's age. The adults hope that a friendship will form between the boys and help take Mark's mind off his grieving. At first, it seems to work and the boys have fun together, but soon Mark discovers Henry has a mean streak. Henry's pranks become more and more vicious and it isn't long before Mark believes Henry is capable of murder. When Mark tries to tell the adults how evil and dangerous Henry is, no one will believe him. They won't believe him because the diabolically clever Henry has everyone convinced that he is the good son and that Mark is misbehaving badly as an emotional reaction to his grief

The first animal scene involves a Staffordshire Terrier who chases the boys as they run across a long narrow foot bridge. Just as the dog is about to catch the boys they reach the other side and go through a gate and quickly close it behind them preventing the dog from reaching them. Henry taunts the dog from the safety of the other side of the gate by barking and growling at the dog and the dog reacts accordingly. This scene was shot in cuts filming the boys and the dog separately. The trainer gave the dog visual and verbal cues to get it to cross the bridge. To get the dog to react properly when he reached the gate, the trainer gave verbal cues and waved a baton in the air to get the dog to bark and growl. For close-up shots of the dog reacting to Henry, two trainers held and supported the dog so he could be photographed at the top of the gate (the dog was comfortable with this). The trainers were off-camera and served as added insurance that the dog did not harm the lead actor. In a later scene the same dog is walking across the same foot bridge when Henry is playing with a catapult gun on a nearby hill. When he sees the dog, he fires the gun and you hear a dog's cry off-camera. You then see the dog walking in a crouched position. The next scene shows Henry and Mark carrying a heavy burlap sack which they dump into an abandoned well. The sack supposedly contained the body of the dead dog. This scene was also shot in cuts. The dog was filmed responding to his trainer's verbal commands to "come", to "slow", to "drop" and to "roll over." Makeup artists applied a "wound" with stage blood which was non-toxic. A dead dog is never seen and, of course, none was in the burlap sack. In a scene involving a cat, Henry is playing with his catapult gun when he sees a cat grooming itself on a wall. He lines the cat up in the sights of the gun and fires it, but the arrow hits a tree slightly above and behind the cat and the cat scampers away. This scene was filmed in cuts. The rock wall that the cat was sitting on was fake and had an electric heater installed underneath it so the cat would be warm and comfortable and sit there throughout the necessary filming. Tuna fish juice was applied to the cat's paws to get the cat to lick them. The arrow that was catapulted out of the gun and hit the tree,was filmed separately, and the cat was not there when it was fired. To get the cat to run off at the proper time, the trainer used a buzzer to signal the cat to come to her. The only other animal action is a brief shot of a hawk flying in the sky. Animal action was monitored by American Humane, with on set supervision by the Animal Rescue League of Boston.