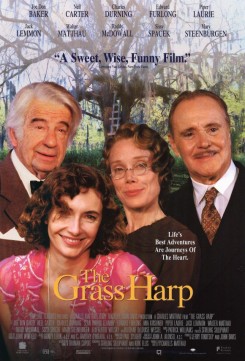 The Grass Harp is a sentimental drama about an eleven year old boy, Colin. It takes place in a small Southern town between the years 1935 to 1940. Colin's mother has died and since his father is a traveling salesman, Colin has to go live with his father's two cousins, Verena and Dolly Talbo. A few days later his father is headed towards Mobile Alabama when his car runs off the road into the Gulf. Colin is now an orphan with only Verena, Dolly, and the cook, Catherine, to look after him.. Verena is the richest woman in town. She is cold, calculating and manipulating to those around her. She shows everyone just how cold she can be when one day she picks up the mail and notices a letter from the Internal Revenue addressed to Dolly. Dolly made so much money the previous year selling her Dropsy Cure, that she needed to file an income tax return. Verena begins plotting how she can profit from Dolly's mysterious Dropsy Cure. The problem will be convincing Dolly to give up the formula so it can be mass produced. What Verena doesn't realize is that Dolly considers this tonic of hers the only thing she has ever been able to call her own. After many heated arguments between the two sisters, Dolly decides to run away, taking Catherine and Colin with her. She takes them to her "secret place", a tree house in the woods. The next day when Verena discovers them gone , she launches a town wide search for them as though they had committed a crime. Through Dolly, Colin now learns about the wonders of the outdoors, including the music the wind makes when blowing through the Indian grass. Dolly calls this music, the Grass Harp.

In one scene a local teen, Riley, is seen near the trio's secret hiding place. He is hunting squirrel with his dog. Riley sees a squirrel crawling up a tree trunk and aims his gun at the animal but is distracted when he sees the trio in the tree house. He walks over to the tree house with a few dead squirrel on a string around his neck. The dog stands in the background waiting. Riley asks if they have enough to eat and lets them know that the townspeople are looking for them. When he starts back to town the dog follows alongside. This scene was filmed in cuts. The shot of the squirrel crawling up the tree was accomplished, by the trainer placing the squirrel at point A and retrieving him at point B. The squirrels around Riley's neck were fake squirrels. In one scene Riley along with Colin goes fishing, after many stabs at the water with their pole they catch a fish. They show up at the tree house with a big dead fish on their pole. To accomplish this scene a dead fish was purchased from a local fishery. There is a scene at a revival, when the sheriff arrives with his chicken to run off the shady characters having the event. The followers are passing around a clothes line with close pins attached for people to clip money on them. When the sheriff arrives the revivalist try to make a fast getaway and the money starts falling to the floor. As people are grabbing the money the chicken picks up a piece, holding it in his beak. Then an actor pulls the dollar out of his beak. The scene was filmed in cuts. The chicken is seen with his head going towards the dollar on the floor then the camera cuts away. When next seen, the chicken appears to have a dollar sticking out of his beak. To accomplish this the trainer merely placed a piece of double sided tape to the under side of the beak, and attached the dollar to the top side of the tape. The actor is merely pulling the dollar off of the tape not out of the chicken's mouth. In many scenes we see the sheriff accompanied by his pet chicken either riding or sitting in his truck or walking down the street beside him. This was a trained chicken and the trainer merely placed the animal on his mark using voice and hand commands to get him to his next mark. There are a few different scenes in the Talbo house where a cat is scene sitting on the table. The cat was placed their by the trainer and told to stay. In one scene Catherine comes into the kitchen and catches the cat with his paw dipped in the fish bowl. She picks the cat up opening the door and letting it outside. The cat's paw is never shown touching the fish. The trainer merely placed the cat on his mark using voice and hand commands to cue the animal. When Dolly, Catherine, and Colin go to the River Woods the first time, we see a group of birds sitting in a tree as part of the background atmosphere. American Humane was represented on set by the Montgomery Humane Society of Alabama.