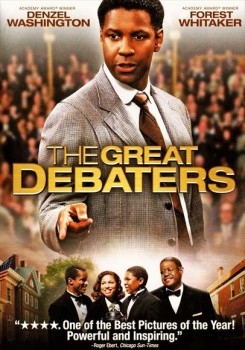 The Great Debaters is the true story of a man in the 1930s who motivated several students to start a debate team. When Mel Tolson (Denzel Washington) becomes the debating team coach at an African-American college, he inspires his incredibly talented debaters to stand up for what they believe in amidst racial turmoil and prejudice.

In the opening scene, a horse and a mule are seen tied to a hitching post outside a party. For this mild action, trainers led the animals to their marks and tied them to the post using a quick release knot. They were released immediately after filming. The area was secured and thoroughly checked for debris.

A mule team pulls a carriage down the road as an oncoming car drives by. Trainers hooked mules to the wagon and placed them on their marks. While cameras rolled, a costumed trainer drove the carriage and cued the mules to slowly walk toward the camera and the oncoming car, which was kept at a safe distance from the mules by the car's well-rehearsed driver.

Horses are in a barn stable when the hay on the barn floor catches fire. One horse rears as a man crouches near him. A wrangler placed the horses on their marks and hid just off-camera near the horses' tails to occasionally reposition them. The wrangler then cued one horse to rear inside the barn, which had a high roof. Camera angles and special lenses made the rearing look higher than it was — the horse only lifted its legs a few feet. Special effects smoke was blown a safe distance from the horses, which were removed from the barn before the controlled fire was started. The barn floor was cleared of debris before filming began.

Two mule teams and some grazing cattle are seen in the background near a tent. Much later, horses and horse-drawn carriages are seen in the background as Tolson (Washington) is released from jail. For both of these scenes, the mules and horses were hooked to their wagons on their marks while costumed owners or trainers sat in the wagons. The cattle were filmed naturally grazing in the pasture while their owners remained just off-camera. Trainers were scattered off-camera as a precaution and the animals were given shade and water between takes.

James Farmer's (Forest Whitaker) car appears to hit something in the road, although this is merely implied by a thump. He gets out of the car to see a dead, bloody pig. Then three men toss the dead pig into the back of a truck. In the background, chickens are seen in a coop and a dog barks. During filming, the car ran over two-by-fours and sandbags — no live pig was ever near the car. A fake pig equipped with an air tube inside was placed near the front of the car, and air was blown into it right before filming to make the pig appear to breathe its last breath. Production provided documentation that the pig was a prop. The chickens and dog were allowed to do whatever came naturally in their secured, fenced-in areas.

A large butterfly flies over a field of cattle. Later, a crane flies over a swamp. Both of these animals were filmed naturally in their own habitats.