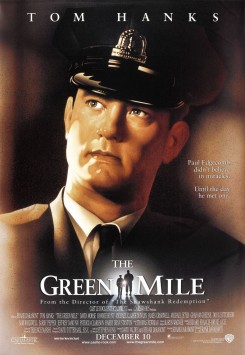 The Green Mile is a surreal and mysterious tale about the relationship between Paul, a death row prison guard, and Duncan, a seven foot tall inmate, condemned to death for killing two young white girls.

There is a mouse seen throughout the film. Mr. Jingles, the mouse becomes a pet of one of the death row inmates, and an entertainer to the rest of the occupants on the "Green Mile", alias death row. More than thirty mice were trained and used in this film. The mice were trained to go to a red bowl containing food after being released. This bowl was strategically place so that it appeared that the mouse was simply running from one end of the floor to the other. This technique was used for all of the scenes where Mr. Jingles is running down the Green Mile and when he travels from cell to cell. There is a scene when the guards first see Mr. Jingles and he runs down the Green Mile and under the restraint room door. This scene was shot in cuts with several trainers placed in strategic areas off camera. In yet another scene, Percy, a mean and hateful guard, tries to harm Mr. Jingles by throwing his baton and other objects at the mouse, but again Mr. Jingles runs under the restraint room door. A real, fake, and animatronic mouse were used. When the mouse is seen eating bread crumbs the real mouse was used. The animal was then replaced with both a fake and an animatronic prop when Percy is in violent pursuit of the rodent. There is a scene where Paul is trying to prepare Mr. Delacroux for his execution and they are discussing the fate of Mr. Jingles. Mr. Jingles runs out of the cell and Percy stomps on the mouse with his boot supposedly killing him. Mr. Delacroux becomes upset and Paul picks up the mouse and takes it to John. As John holds the mouse and blows into his cupped hand, the mouse revives. After reviving it, John places Mr. Jingles on the floor and he runs from A to B back into Mr. Delacroux's cell. A fake mouse was used when Paul picks up the dead Mr. Jingles and also when John blows into his hand to revive the mouse. A real mouse was placed in the actor's hand for the shot when John places the revived mouse on the floor. When the mouse is shown lying on the floor dying, animatronic and CGI techniques were used. In several scenes Mr. Jingles plays fetch with Mr. Delacroux, the inmate who has befriended the little rodent. Mr. Delacroux throws a wooden spool across the floor and tells the mouse to fetch. Mr. Jingles runs across the floor and then stands up to the spool placing his front paws on the spool and moves forward. The spool then rolls forward as Mr. Jingles walks behind it. The mouse was prepped prior to filming. The trainers placed the mouse on its mark and cued it with food as a reward. There are several scenes where the mouse runs from point A to B when the guards throw out pieces of bread to him. He also walks along Mr. Delacroux's out stretched arms from finger tips to fingers tips, sits on a guard's shoulder, and is picked up by his tail by one of the guards. After John performs a miracle, fireflies are seen flying out of his mouth. Special effects techniques were used for these scenes. Other animal action consists of guards on horseback outside the prison, hounds on leashes looking for the missing girls, and cows in the background grazing. Mr. Jingles was the quite the diva on the set and showed a decided lack of respect for his co-star Mr. Tom Hanks. During one day of filming when Mr. Hanks was holding the diminutive actor, Mr. Jingles decided to do his business in the palm of Mr. Hanks' hand. As Entertainment Weekly noted, this is one mouse that will never work in this town again! For more stories on animals and their celebrity humans and other movie new go to "Reel Pets" at www.animalfair.com or see Animal Fair Magazine.