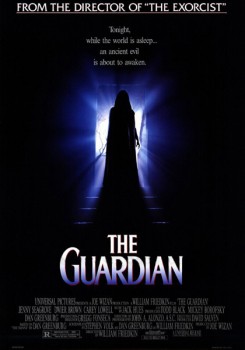 From William Friedkin, the same man who brought audiences The Exorcist, comes The Guardian, a spine-chilling, macabre story of the supernatural. A young couple hire a seemingly ideal woman to care for their infant son. She turns out to be the nanny from hell who steals babies so that she can offer them as sacrifices to a grotesque tree that feeds off the infant's blood. The nanny uses wolves to do away with anyone who might prevent her from carrying out her evil mission.

There is a scene where wolves are feeding off the mutilated body of a man. It was really a mannequin that had been stuffed with meat from a supermarket. The wolves never connected with it being a person and had great fun finding the stuffing. When the wolves attack an architect, they are really playing a game with their trainer, who was a photo double for the architect. In a scene where the wolves attack the car in which the baby's mother is trying to escape, a wolf has his head run over in the getaway. This was accomplished by using a fake wolf. Fake wolves were used whenever the car was in motion. The real wolves were only permitted on or around the car when the motor was off. Sounds of growling, snarling, howling, etc., were added in post-production. American Humane was present during the training of the wolves and was also on the set whenever the wolves worked. The trainers were extremely protective of their wolves.