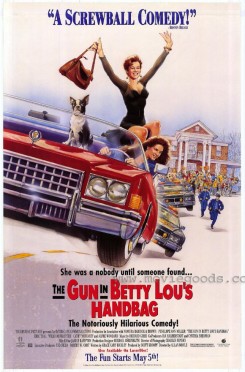 Gun In Betty Lou's Handbag, The

The Gun in Betty Lou's Handbag is a comedy about Betty Lou, an introverted, dowdy, frustrated librarian/housewife. Her husband, Alex, is a by-the-book police detective who is constantly bucking for a promotion. As a result, Alex has very little time or attention to give to Betty Lou. Alex is working on a case involving the murder of a sleazy car salesman. The police link this murder to a big time Cajun mafia leader, Billy Bodine, but don't have enough evidence to make the case stick. Betty Lou, on one of her walks with her dog, Scarlett, comes across the murder weapon and quickly picks it up and puts it in her handbag. She becomes very excited and immediately goes to a pay phone to inform Alex of her find, thinking he will be extremely proud of her. But, Alex is too busy to take her call, so she decides to go to the station house personally. While in route she runs into her very outgoing best friend, Eli, who shuffles Betty Lou right into a department store to go shopping. Betty Lou tries to tell Eli about the gun but can't get a word in edgewise. Out of frustration, and an attempt to get someone, anyone, to listen to her, so goes into the ladies room of the store and shoots the gun at a mirror. The police come and immediately arrest Betty Lou. Once at the police station, she is charged with the murder of the car salesman. Betty Lou, sick and tired of being taken for granted and ignored, and to shock her husband, pleads guilty to the murder, and confesses to having an affair with the man as well. We watch as an innocent woman tries to prove her guilt in this murder case and how it completely changes her life.

Scarlett is seen in several scenes as Betty Lou's pet. In one scene as Alex is walking to the breakfast table, Scarlett, a very small dog, is skidding along the tile floor behind him, holding onto his pant leg. The little dog was given verbal commands by his trainer to play tug with the actor's pant leg and given food rewards afterwards. Other scenes with Scarlett simple, such as, riding in the car, eating ice cream with Betty Lou, barking at passing cars, watching T.V. and sleeping.