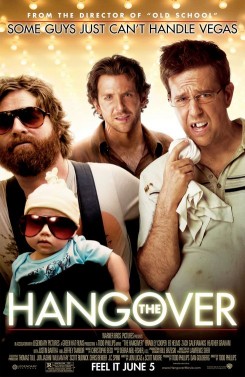 Four friends go to Las Vegas for a bachelor party. They wake up the morning after to find that they can't remember anything from the night before. They must then retrace their steps and try to piece together the events of the evening, and find the missing groom.

As Alan (Zach Galifianakis) is using the toilet, he turns to see a tiger staring at him. He runs out of the bathroom and returns holding a steak with pills in it, in hope of knocking the tiger out. The tiger reacts to him re-entering the room by pawing at him, standing up and walking toward him. This scene was filmed in separate shots. A large eye bolt was fastened to the ground. The tiger was brought to the set on a leash, which was put through the eye bolt and then held by a trainer hiding in the shower. Another trainer stood on a ladder holding a piece of meat above the actor to get the tiger to look, snarl and growl. Camera angles made the actor appear to be closer to the tiger than he really was. A trainer tied a piece of meat to a string and swung it in front of the tiger, which pawed at it and got up to try to get the meat. The string with the meat was digitally removed in post-production so it appeared as if the tiger was reacting to the actor.

The men transport the tiger, now wrapped in a blanket and lying on a bellman's cart, from the room. Part of the tiger's head sticks out from under the blanket. The men put the tiger in the back seat of their car and drive off. This action was shot with a fake tiger prop.

As the tiger begins to awaken, its head pops up in the back seat. Trainers led the tiger into the car by its leash, placed it in the back seat and cued it to lie down. The tiger then got up and looked over the seat. These shots were filmed in the absence of the actors, who were filmed separately and added in post-production.

The men jump out of the car, and the tiger, still inside, begins to destroy the interior of the car. This was filmed in separate shots in front of a green screen. Trainers guided the tiger by its leash and placed it inside the car with the windows almost all the way up (lowered just enough to let in some air) and the doors closed. The trainers placed a large cage around the car as a safety precaution to separate the crew and actors from the animal. The tiger moved naturally around the car and actually began to tear up the interior. The actors stood near the car but outside the cage, which was edited out in post-production, and said their lines.

The men then push the car containing the tiger, whose head sticks out the window. A trainer placed the tiger in the car and hid inside the trunk, holding the tiger's leash through a small, specially made hole in the back seat. The tiger put its head out the open window, and the actors remained a safe distance away from it while the hidden trainer controlled it by the leash.

The men are seen on video walking the tiger up a driveway and into a parked police car. As they try to get the tiger into the car, one of them pretends to hump the tiger. This scene was filmed in separate shots. One trainer hid inside the police car while another trainer doubled as the actor and walked the tiger down the driveway and into the car. He appeared to shove the tiger into the car by pushing on its rear end. He then pretended to hump it. Then the scene was filmed again, only this time the actors were used along with the trainer. The actors held the end of a long leash, and a trainer held the middle part of the leash that actually connected to the tiger. In post-production, the trainer and his portion of the leash were removed, making it appear as if the actor was really leading the tiger. The actors were then filmed walking to the police car and pantomiming the pushing and humping motions, which were later combined with the footage filmed with the trainer.

In a few scenes, a chicken wanders around a villa that the men have rented. Stu (Ed Helms) is passed out on the floor and wakes up to see the chicken walking near him. He gets up and begins to stumble around the room, and almost trips over the chicken. Later the chicken is sitting on top of a piano as Stu plays it and sings. A trainer placed the chicken on the ground and allowed the chicken to walk around at liberty. The area was checked for safety ahead of time and the actors were instructed on how to handle the chicken properly and reminded to step very carefully around the bird. The actor's apparent tripping over the chicken was a very choreographed move.

As Phil (Bradley Cooper) searches a messy room for a purse, he knocks the chicken off a counter with his hands. A trainer placed the chicken on the counter and a padded platform was secured next to the piano for the bird to land on. The actor was well-rehearsed in this action and the gentle movements were well-choreographed. The debris on the floor was made up of strategically placed items that were safe for animals. The "glass" on the floor was actually candy glass, which is a harmless movie prop.

As the men stand in a garage and talk, another man walks a dog up the driveway and stops. One of the men begins to pet the dog. During the wedding sequence, a dog lies on the floor and guests pet it as they walk by. The actors were introduced to the dog and instructed on its proper handling before filming began. For each scene, a trainer placed the dog on its mark and stood off-camera while the dog performed the mild action.