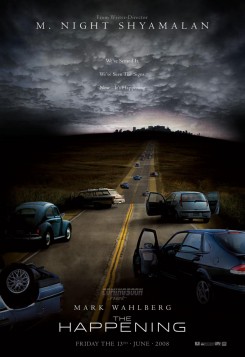 A science teacher (Mark Wahlberg) and his wife try to flee New York after a strange occurrence seems to be taking over the people of the city.

During the opening sequence, people in the background walk their dogs on leashes and play with them. The dogs were accompanied by their actual owners. All grounds were checked for safety ahead of time. A woman tosses a ball to a dog, who fetches it and brings it back to her. This was an "insert shot" filmed separately from the rest of the action and the dog's owner doubled as the actress. Later, a woman walking her small dog on a leash drops her keys, which fall to the ground next to the dog. The dog then runs out of the park and across the street, where the cars are all stationary. This scene was also filmed in separate shots. The actress was handed the leashed dog right before filming and instructed on how to walk with him. A trainer then cued the dog to stay and dropped some keys near him. Another trainer standing on the other side of the street cued the dog to come to him and retrieved him, rewarding him with a treat. The street was closed off to traffic and the cars and people remained still as the dog ran by.

Later, as Elliot (Mark Wahlberg) looks for Julian (John Leguizamo) in the train station, Amtrak guards walk bomb-sniffing dogs on leashes in the background, and Elliot passes one. As another man walks by with his suitcase, a dog sniffs it as he passes. Three actual Amtrak guards and their K-9 bomb-sniffing dogs were in this scene. The dogs were all accustomed to patrolling and sniffing for bombs at this station, so the action in the scene came naturally to them.

A man holds up his phone and shows a video of a zookeeper inside a lion's cage at the zoo. In this video, a few lions roam inside the cage, and the zookeeper approaches one lion, who bites his arm. Seconds later, the lion is eating the bloody limb as the zookeeper stands nearby. Another lion walks over to the zookeeper and grabs his other arm in its mouth, pulling it off. The armless zookeeper falls to the ground as the lions eat. This scene was filmed in separate shots on a trainer's compound. Trained lions were used for this scene. Trainers brought the lions into the enclosure and placed them in various spots. During filming, trainers cued the lions to look in certain directions or snarl. Several off-camera trainers inside the cage used sticks, food and bait bags to guide or distract the lions. A costumed trainer doubling as the actor wore a prosthetic arm, which he controlled with a handle, and a green-screen sleeve over his real arm to make it invisible on camera. The fake arm was baited with food. After one of the lions tugged on the arm a bit, the costumed trainer released it, allowing the animal to pull it off him. Lions were switched after only a few takes so they would not get possessive of the arm. The trainers standing just out of camera range stood between the lion and the costumed trainer and distracted the animal with food to get it back into the catch cage. The blood on the arm was a nontoxic material safe for lion consumption. The costumed trainer called to the lion, which jumped up on him, playfully wrestling with him. The trainer fell backwards and the lion fell on top of him in a choreographed fall. The trainer wore green-screen sleeves on both of his arms so it appears as if they are severed.

American Humane also monitored some scenes with frogs, which were cut from the theatrical release.