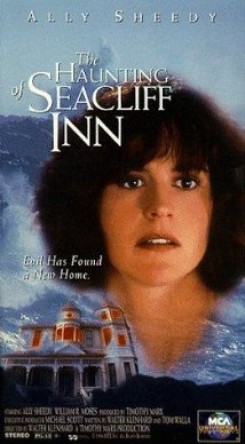 Haunting of Sea Cliff Inn, The

The Haunting of Sea Cliff Inn is a good old-fashioned ghost story revolving around a young yuppie couple that have decided to go back to the basics after their high stress careers almost cost them their marriage. Susan and Mark decide to move to Vermont and open a little bed and breakfast and live out their lives in a calmer way than the high pressure city would allow. They look at several houses and finally decide on one. When they arrive to sign the papers, Susan spies an old house perched on a cliff in the distance. She tells Mark that she no longer wants the house that they have picked but must have the house on the cliff. Mark argues the point, but there is no winning. Susan insists they drive up and see if they can purchase this as their new home/business. Upon their arrival they are met by Lorianne, the owner of the house. Over tea, she informs them that the house is not for sale. Susan, though disappointed, understands completely. The next afternoon Susan goes back for another visit with the friendly older woman, only to discover Lorianne lying dead in a pool of blood, apparently having taken a bad fall, hitting her head and bleeding to death. Three months later, Lorianne's daughter contacts Susan and Mark to inform them that the house is now up for sale. Over the shock of finding Lorianne, they agree to purchase the house. Once in the house, it isn't long before the couple realize this is no ordinary house, and that Lorianne's death may have not been accidental. After many very strange occurrences, Susan does some extensive research on the old house. She discovers that a very vicious murder had taken place in this house by, predictably, a man and woman looking just like Mark and Susan more than 100 years ago. Susan and Mark must now try to rid the house of the restless spirits and set their souls free before the same scenario occurs between them.

There are several animal action scenes in the film. Susan has a dog, Max, who is seen in a few scenes riding in the family car, playing fetch on the beach with Mark, and sleeping. In one scene, Max has entered the dark room where Mark works with his photography while the couple are in the house having dinner. After the dog enters, the door mysteriously closes and locks behind him, the window closes, and the gas knob on the furnace is turned on with the pilot off. The dog barks and scratches at the window and door, trying to get someone's attention, but to no avail. Hours later Mark enters the room to find the dog lying dead on the floor. When the dog is barking and scratching at the door, he is doing so following his trainer's verbal commands from the other side of the door to scratch and speak. The dog which is lying dead was actually a fake dog provided by the props department. There was never really any gas released into the room. A large dark Husky is also seen in a few scenes. In one of those scenes, he leaps through the closed window of the den, landing on his feet on top of a table. Mark goes down stairs to see what all the noise is about. He finds the dog standing there. The dog growls at Mark, and then retreats through the same broken window. The dog had been carefully prepped for this scene. He was trained to jump through candy glass, which is what was used in this scene, and caused no injury to the dog, who was completely comfortable with this action. He then followed verbal commands from his trainer, who was outside of the window, to growl and come, receiving food as a reward afterward. In another scene, the dog has entered the house via Max's doggie door. He goes to the top of the stairs and then leaps down onto Mark as he passes. The trainer doubled for the actor for this scene. The trainer called the dog to jump to him where the dog and the trainer merely rolled around on the floor in play. This same dog is also seen in the back seat of a one of Susan and Mark's neighbor's car where he snarls, causing the woman to swerve off the road. The car crashes and ignites into flames. This scene was shot in cuts. When the dog was in the car snarling, he was following verbal commands from his trainer, who was in the front passenger seat out of camera range. Neither the dog nor the actor were in the car at the time of the crash, and were nowhere near any fire. Lorianne's cat is also seen sitting on the kitchen table eating pie in one scene. The pie was actually cat food placed in a pie tin.