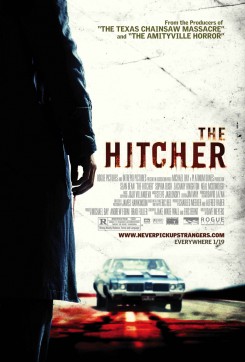 Grace Andrews (Sophia Bush) and Jim Halsey (Zachary Knighton) take a road trip to party with some friends over spring break. Their trip turns into a nightmare after they pick up a man they think is having car problems.

A rabbit begins to cross the street and is hit by a speeding car. This scene was filmed in two separate shots and also used computer images. First, the speeding car was filmed. The road was then closed to traffic and the area was checked before filming to make sure it was safe for Harry, the rabbit, to walk on. A trainer put the rabbit on its mark on the side of the road. Another trainer stood just across the road with a cage to retrieve Harry. The rest of the scene was computer generated imagery.

As Grace exits an interrogation room at a police station, she sees a dog and follows it. The dog goes into another room and begins to eat the body of a dead officer on the floor. One trainer put the dog on its mark, while another trainer stood offscreen using hand signals and verbal cues to get the dog to achieve the action. Some dog food was put on the face of the actor on the floor so the dog would lick him. The fake blood on the "dead" officer was nontoxic and safe for the dog.

Two big dogs jump up against the fence of a junkyard as Jim and Grace run by. Two Belgian Malinois dogs named Brownie and Bullet played this part. Two trainers stood off camera, holding the dogs. A third trainer standing outside the fence, behind the actors cued the other trainers to release the dogs. The third trainer verbally cued the dogs to run, bark and jump up against the fence.

As the couple run through a building to find a place to hide, they pass a scorpion crawling on the ground and Jim pushes it aside with his foot. They also pass a large spider web with spiders crawling on it. The shot with the scorpion was an "insert shot," or a close-up inserted into the sequence. For this shot, a trainer placed the scorpion on the ground near the feet of another trainer who doubled as the actor. The second trainer gently nudged the scorpion with his foot. The spider web was fake but the spiders were real. A trainer placed two spiders on the web right before the camera rolled and retrieved them afterwards.

The dragonfly that splatters as it hits the windshield of the car was computer generated.