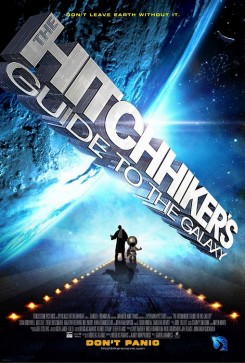 Hitchhiker's Guide to the Galaxy, The

Arthur Dent (Martin Freeman) is having a really bad day. The government expropriated his home to raze it in the name of progress, and he soon learns that aliens plan to demolish the Earth to build an intergalactic highway! Arthur is plucked off the planet in the nick of time with his friend Ford Prefect (Mos Def), an alien/researcher working on the latest edition of The Hitchhiker's Guide to the Galaxy. Arthur and Ford stow away on a spaceship and journey through the galaxy trying to deal with this distressing cosmic curve ball.

In one scene, as Trillian (Zooey Deschanel) reaches for her knapsack on the floor, it falls over and two white mice scurry out. To set up for this action, a wooden frame was placed around the shooting area to keep the mice in place. The area was checked for escape routes and crew members blocked any holes with foam padding.

The sack had fishing line attached to it so that, as it toppled to the floor, it could be pulled forward gently by an off-camera props technician. The trainer then lifted both mice from their cage and gently dropped them one at a time to the floor.

After he throws up a mouthful of yarn, Arthur flinches when he discovers a mouse crawling on his back. For the scene, the trainer placed the mouse at the base of the actor's neck while the second assistant director held the cage halfway down Arthur's back and out of camera range. The trainer stood ready to retrieve the mouse if it did not go back to the cage. Although it looks like Arthur swats it away, the actor never came in contact with the mouse.

In another scene, two mice chew on fiber optic wires in the spaceship. These rodents did not actually chew the wires; trainers smeared the wires with peanut butter, which the mice happily licked off.

In Arthur's home, two mice wander around the dining table and later operate the elevating saw device that will extract the man's brain. This scene required extensive visual and split-screen effects; the mice and human actors filmed their action separately. As a safety precaution, American Humane's Certified Animal Safety Representative insisted that production secure all props to the table with a safe adhesive so they could not get knocked over and injure the mice.

When the device rises from the fruit platter, two mice made of sculpted foam, latex, and fur were used. As soon as the real mice were in position on the raised platform, the camera ran. At the trainer's command, the second assistant director gently blew through a drinking straw previously dipped in cheese to attract their attention. The mice only had to stand looking toward the camera.

After falling to the table, one mouse pushes the "point of view" gun toward Arthur but both mice get smashed by a teapot. For this scene, a special-effects technician dropped various cogs, springs, and bolts, which were all made of lightweight metal or fiber resin. All items were checked for weight and to ensure that nothing sharp or protruding could hurt the animals. The items were dropped first, then the mice.

For the next shot, the trainer positioned one mouse with its front feet on the gun barrel and back legs on the table. When the mouse was in the correct position, an off-camera special-effects technician gently pulled a fishing line attached to the gun, making it look as if the mouse pushed the weapon.

The smashing teapot was a video effect.

The dolphin footage was shot under the supervision of trainers from the "Dolphinarium" at Loro Parque in Tenerife, Spain. Production filmed the marine mammals as they performed their customary tricks.

A flock of sheep can be seen running in a field in one scene. A second unit director arranged to film these sheep, which belonged to a local English farmer. To accomplish this simple action, the farmer called his sheep from the field next door to a second meadow, and they came running at his command.

The montage of nature shots, featuring animals such as birds, rabbits, a snake, and a leopard, was all stock footage.