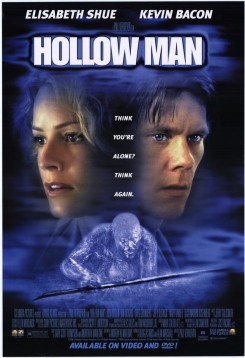 In this Science fiction thriller, Kevin Bacon plays Sebastian, a researcher who develops a serum that renders animals invisible. He decides to inject himself with the serum and learns how easy it is to do evil things when you don't have to look at yourself in the mirror.

Rat Action In the opening sequence a rat runs to a bowl of water in a cage. A claw picks up the rat and it appears to be suspended in air. Then something invisible decapitates the rat. There were two trainers on the set at all times. One trainer released the rat into the cage, while the other trainer stood off camera and held up food to make the rat move. The claw picked up an animatronic rat and appeared to kill it. A Variety of Species A variety of animals, including dogs, cats, chimps, Guinea Pigs, and orangutans were seen in cages in the laboratory. Six trainers and two veterinarians were present at all times. The animals were put into the cages by the trainers. The cages provided all the comforts of home. The trainers stood in front of the cages, just off camera, and used verbal cues and hand signals to get the animals to react. For example, when the trainers wanted the chimps to appear upset and agitated, they verbally cued the chimps to "Shake the bars", "Hit the bars" and to "Speak". The animals reacted accordingly. Props Used Isabelle, the gorilla was played by a man in an ape suit. The dog that is smashed to death and the fly that Sebastian kills are both fake.