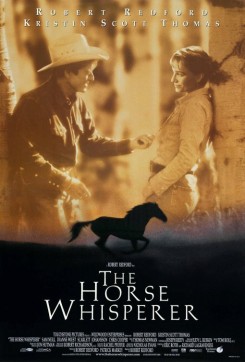 The Horse Whisperer is a film about Tom, a gifted horse trainer who, through a unique process, is able to rehabilitate a disturbed horse after the animal has experienced a trauma. Annie, the concerned mother of a troubled girl, enlists Tom's services after her daughter, Grace, is involved in a tragic accident while riding her horse, Pilgrim. Annie knows that the healing of her daughter is ultimately connected to the healing of her horse.

Do "Whisperers" only work with horses?

Actually the term "whisperer" refers to a method of training that is based in humane operant conditioning techniques. This, in layman's terms, is mainly the handling of an animal with understanding, positive reinforcement, respect, friendship and trust which builds a communication bond between the human and the animal. Basically, the human must study and then use the specific body language characteristic to that species to then communicate with the animal in his own language. Today, there are many trainers who use this new method to train many different species, free of fear tactics. These are the "Animal Whisperers."

When simulating an "accident", how do you keep from injuring an animal?

Filming has become very sophisticated with the use of animatronic animals and advanced editing techniques. Live animals are used to "set up" a shot and then animatronic, meaning robotic remote computer controlled replicas, can be used where it appears as if the animal is in jeopardy. Animal-tronics have advanced to the point where each limb as well as the head, neck, nostrils, mouth and eyes can be controlled individually. Editing makes it look seamless.

The Horse Whisper is a film about Tom Booker, a gifted horse trainer who, through a unique process, is able to rehabilitate a disturbed horse after the animal has experienced a trauma. Annie, the concerned mother of a troubled girl, enlists Tom's services after her daughter, Grace, is involved in a tragic accident while riding her horse, Pilgrim. Annie knows that the healing of her daughter is ultimately connected to the healing of her horse.

There are several scenes where the horses performed the following behavioral stunts; falling, rearing, bucking, lifting head up and down, pawing at the ground, kicking the sides of the stall, lay downs, etc. The trainer cued the horse with verbal and hand commands. For all of these scenes only specially trained stunt riders were used. All of the scenes that appear to involve horses in a dangerous situation were simulated. The horses were prepped prior to filming for all scenes. Whenever the real horses were used, additional wranglers were strategically placed around the perimeter to insure the safety of the horses.

In the beginning of the film, Grace and her friend, Judith, are out riding one morning after a recent snowfall. The horses loose their footing and both horses and riders slide down an incline and collide with a semi tractor trailer. Judith and her horse, Gulliver, are killed while Grace and Pilgrim are severely injured. This scene was shot in many cuts using both real and mechanical horses. All of the scenes where the horses slip and slide at the point of incline were accomplished by using trained falling horses and professional stunt riders. As a safety precaution, the incline was constructed out of special non-toxic materials covered with fake and real snow and controlled by a hydraulic life. Fake horses were used for the segments where the horses slide down the incline and when the truck collides with the animals. The mechanical horse was covered in real horsehair and certain limbs and body parts were moved mechanically by remote control.

When Pilgrim is found under the bridge, a veterinarian with a syringe in hand advances toward him. The horse snarls and runs past her. As he runs by, she successfully injects the syringe into the horse's flesh. The scene was shot in cuts using a prop syringe with a retractable needle. The injuries on the horse's face, neck, and parts of his torso were achieved with the use of non-toxic make up and prosthetics. A big plaster impression was made of the horse and the expert make up artists built prosthetic pieces with simulated gashes in them that were then fit to the horse. Several prosthetic pieces were created to show the various stages of healing. In addition, the prosthetics needed to be created for as many as six different horses, because different horses were trained to do different stunts for the various scenes throughout the film.

While the vet talks on the phone to Annie, Grace's mother, Pilgrim is lying on the ground in the background scared and bloody. The scene was shot in cuts using a real and a fake horse. The real horse, trained to do the lay down, was used for the establishing shot then replaced with a fake horse.

Pilgrim acts hostile to the attendants at the stables when they attempt to load him into a trailer for transport to Montana. This scene was shot in cuts. The trainer cued the horse with hand and verbal commands getting the horse to look quickly in one direction and then another to simulate an agitated and aggressive state.

Tom, the horse whisperer hired by Annie, walks Pilgrim in a pond for therapy. Pilgrim, on a lead, is submerged up to his shoulders in the water and led in a wide circle. When he is spooked by the sound of a ringing cell phone, Pilgrim rears several times, knocking Tom over and running out of the water. This scene was shot in cuts. The head wrangler led the horse into the water as two other wranglers stood on the bank holding 14-foot leads that were attached to the horse's halter. The head wrangler doubled for the actor when the horse supposedly knocks Tom into the water. The bed of the pond was cushioned with fatigue mats and sand for good footing.

In another scene, Grace and Annie participate in the annual cattle drive where they administer shots and brand the new calves. The scene was shot in cuts. Experienced wranglers were used to do the actual herding. When the calves are seen being roped for branding and vaccinations, the act of roping was simulated. The calf was lightly flanked and a loose rope was placed around its feet. Prior to filming, the hair on the calf's hip was clipped to form a "Double Divide" pattern giving the simulated appearance of a brand. The calf was placed over a small hole in the ground and, at the precise time that the cold branding iron was placed on the hip, a burst of cool steam was released from the hole to make it appear as if the flesh had been seared. A plastic retractable syringe was used for the segment of the scene where the calves received their shots.

When Tom attempts to reintroduce Grace and Pilgrim, the horse resists the contact convincing Tom to use a more aggressive tactic. He lops a rope around Pilgrim's left hoof and attaches the other end to the saddle horn. The horse hobbles around for a few seconds and then Tom lays him down. Tom instructs Grace to sit on Pilgrim and stroke his neck. After the bonding process is over, Grace mounts Pilgrim and rides him around the ring. This scene was shot in several cuts. Only horses trained for this particular stunt were used. A wrangler and the actor were used for the segment where Tom loops the rope around the hoof and lays the horse down. The wrangler stood directly behind the actor cueing the horse. The horse was very comfortable with the action and only a limited number of takes were done for each segment.

Other animal action consists of cows, dogs, horses, and other farm livestock, used as background. There are also several scenes of people riding, galloping, or cantering horses through pastures, creeks, and countryside.