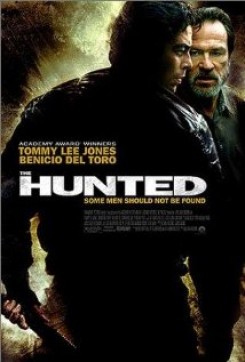 Hallam (Benicio Del Toro) is a highly trained, ex-Delta Force operative that rose to the rank of war hero. Unfortunately, something in his mind and heart snaps, turning him into an eco-terrorist and assassin who hunts and guts the hunters who would do just that to the trophy animals in their sites. Hallam is out of control and the only one who can track him down and bring him to justice is the very man who taught him everything he knows about killing and survival – L.T. Bonham. The hunter becomes the hunted.

The Rats of War

As the film opens, the war in Kosovo is raging and Hallam is on a mission to take out the sadistic Serbian leaders who are slaughtering every Albanian man, woman and child. Hallam deftly makes his way through the battle torn streets stepping over piles of dead bodies and debris infested with scavenging rats. Trainers placed the rats on their marks and used strategically placed food to keep them interested and in place.

L.T. Bonham no longer works for the government training young men to be killing machines. He utilizes his talents as a tracker for the Wildlife Fund, saving wild animals from cruel leg hold traps. The flash of a falcon in flight over the snow-covered wilderness belies the dangers awaiting the animals on the ground. Bonham tracks an injured white wolf badly wounded and ensnared by the couplings of a metal trap. He follows the trail of blood and finds the animal further ensnared by the strap of the coupling that has caught on a bush. The tracker frees the wolf and makes a poultice for the wound. After attending to the wound, Bonham watches as the animal limps away, wary but free.

For this scene a trained white wolf named Frosti was used. During three weeks of pre-production training, the animal became accustomed to a loose plastic covered strap around its leg. Fake, non-toxic stage blood was used to indicate the wound. When the wire and metal rod from the trap are seen they were placed in the snow and not attached to the strap on the wolf. The trainers cued the wolf to stay, lay down, or to move A to B using verbal commands. The animal was trained to hold up its paw and gave the impression it was injured. When it appeared as if Bonham was interacting with the wolf, the trainer acted as a double for the actor. Off camera the wolf was provided a warm trailer with food, water and bedding, and given plenty of exercise and rest periods. The wolf enjoyed playtime in the snowy location.

In another forest location, Hallam is busy hunting two hunters who have a buck in their sites. The buck was brought to the set by the trainers and cued A to B using verbal commands and food rewards.

The Real Cat in the Cat and Mouse Game

Although Bonham is able to bring Hallam in, he escapes the FBI and takes refuge with his girlfriend, Irene, and her daughter. Irene's cat crosses the room and hides behind a pillow on the bed. Trainers gave the cat buzzer cues to get it to move onto the bed and behind the pillow.

During the early stages of the hunt for Hallam, the police comb the woods on foot, on horseback and with search and rescue dogs. The action was mild and the animals were supplied and cared for by professional trainers.