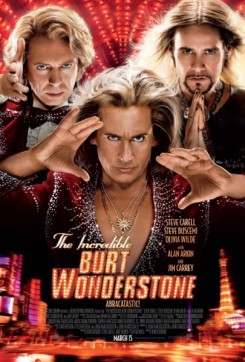 In this raucous comedy about dueling magicians you have to expect some doves and other interesting animals to imbue the tricks with some mystery. However, the American Humane Association was on set and behind the curtain to make sure every animal was safe and sound.

In the scene where a dove flies out of an actor's mouth, production used a green screen to create this effect. In order to achieve this image, production cut a hole in a flag fitted with green screen. Trainers then placed the bird at the hole and cued it to fly through the hole and into a cage at the other end. A monofilament was placed on the bird's leg to prevent him from flying away. The trainer had production wait a little while between takes to let the bird settle. The purpose of flying through a hole was to give the effect of flying out of an actor's mouth.

In several scenes, we see a pair of rabbits and a pair of doves in their respective cages in the background of Steve Carrel's house. Trainers made sure the animals had plenty of water and the temperature on the set was appropriate.

In the scene where we see an actor walking a water buffalo in the background, trainers hid behind a hut near the buffalo to make sure everything went okay. The buffalo was on a lead rope and merely walked from point A to point B. In the same scene, an actor hands a little boy a rabbit who walks off with it. Prior to shooting this scene, trainers instructed the actors on how to hold the rabbit.

The chickens grazing near the huts were brought in by trainers, who spread feed throughout the area to keep them from running off.

The scene where we see the bird fly out of the salt shaker was achieved in the same manner as the scene where the bird flew out of the actor's mouth. Again, they cut a hole in a flag fitted with green screen and had birds fly through the hole and into a cage. The only difference this time was the flag was turned horizontally.

There is a sequence in the film where the dueling magicians try to outdo each other with tricks using a puppy. First, the actor turns a balloon into a puppy and hands it to a young actor. This scene was done in different takes. First, actor holds a balloon animal. They cut and a trainer runs in and replaces the balloon with a puppy. Likewise, when the actor tries to squeeze the puppy between his hands, production achieved this with a series of shots. In one shot, the actor holds the puppy, they then have the actor freeze, the trainer takes away the puppy, then have the actor act as if he's squeezing something. When the other actor opens a box revealing the puppy and shows everyone at the party, trainers placed the puppy in the box for approximately a brief amount of time during each take. Between takes the puppy was removed from the box and given treats. When the actor takes the puppy out of his pants and shows it to the actress, the actor basically held the puppy below the shot, then lifted the puppy, acting as if he were pulling it from his pants. The camera shot him from the waist up so we never actually see a puppy being taken out of his pants.